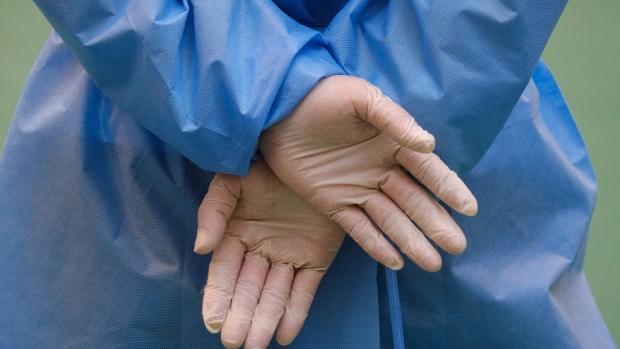 A health worker wears latex gloves at a Covid-19 testing centre set-up in the grounds of the Richland Gardens housing estate in the Kowloon Bay area of Hong Kong, China, on Thursday, Dec. 10, 2020. Some residents from one of the developments's tower blocks are being quarantined amid a coronavirus outbreak in the housing estate. Photographer: Roy Liu/Bloomberg , Bloomberg

(Bloomberg) -- Supermax Corp. shares sank after the U.S Customs and Border Protection ordered personnel at U.S. ports of entry to seize its latex gloves made in Malaysia.

The stock slid as much as 9.8% to 2.03 ringgit in Kuala Lumpur Thursday to the lowest level since May last year. Trading volume was almost 17 times the 20-day average for this time of day. Shares of other glove makers Top Glove Corp. and Hartalega Holdings Bhd. also declined.

The U.S. CBP said Thursday that it issued the withhold release order against Supermax and units based on information that “reasonably indicates” the use of forced labor. The company makes up to 24 billion pieces of gloves annually, meeting about 12% of the world demand for gloves.

The CBP identified 10 of the 11 International Labour Organization’s indicators of forced labor while investigating Supermax, the agency said in a statement.