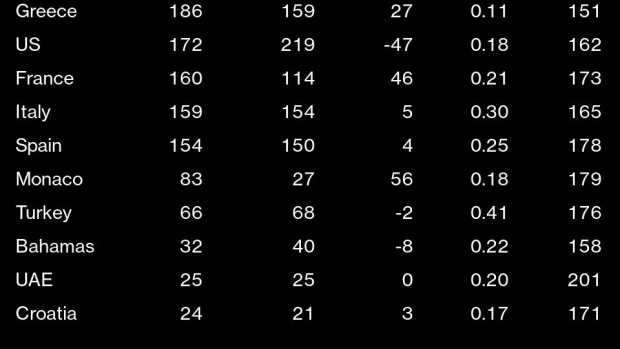 (Bloomberg) -- Monaco is the place to be this weekend in the yacht world as the super wealthy rush to take in the Formula One Grand Prix.

The nearly 100-year-old annual race is expected to see some showers over the next couple of days, though it’s not expected to deter the floating party scene.

More than 80 super yachts, at a combined length of 4.5 kilometers (2.8 miles), are already clustered off the tiny city-state in the French Riviera, with more likely en route.

While the superyacht world was thrown into turmoil following Russia’s invasion of Ukraine and the sanctions placed on billionaire Russian oligarchs, signs of normalcy are returning to the Mediterranean, now boasting the largest concentration of yachts heading into the summer season.

Greece jumps ahead of the US on the Bloomberg superyacht leaderboard, with France, Italy and Spain not too far behind.