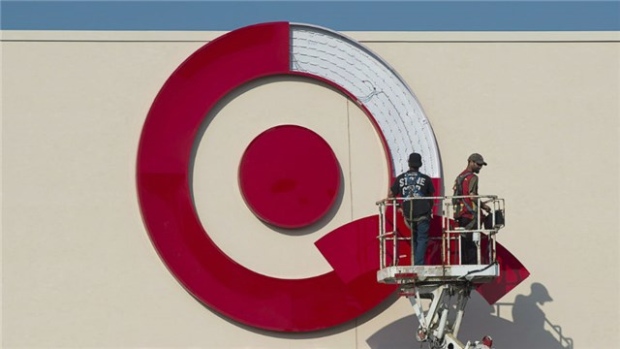 Workers install an outdoor sign at a new Target store , The Canadian Press

Suppliers of insolvent Target Canada want to challenge a $1.9 billion intercompany debt that threatens to dilute the amount of money unsecured creditors will eventually recover.

“We’re happy that there will be a fair and open process to challenge this claim,” Lou Brzezinski, a lawyer for Blaney McMurtry LLP, said after the Ontario Superior Court ruled on March 5 that the debt will be subject to a thorough review by a monitor.

The liquidation process took a surprising turn after the retailer disclosed in recent court filings that it owed $1.9 billion to Target Canada Property LLC (Target PropCo)—the property management company it created for its store operations here.

The claim, which makes Target Canada its own biggest creditor, intensifies tensions between the retailer and its suppliers hungrily waiting to snap up what’s still owed to them after its failed foray into the Canadian market. The retailer abruptly closed its 133 Canadian stores in January after announcing it would not make a profit for at least another five years.

According to Alvarez and Marsal Canada Inc., the court-appointed monitor overseeing Target Canada's liquidation process, the retailer ordered $100-million worth of goods just a month before the company filed for bankruptcy protection.

"If Target PropCo is the largest creditor, then they will get the benefit of that inventory. And that's what doesn't sit well with the suppliers," Brzezinski said in an interview with BNN.

Brzezinski, whose firm represents some suppliers, told the court Thursday his clients are "quite unhappy" with the lack of information surrounding the $1.9 billion claim.

"This needs to be an open process wherein [all other] creditors need to be satisfied," Ontario Superior Court justice Geoffrey Morawetz said, emphasizing the need for transparency three times. "Any claims by Target PropCo should be subject to a vetting process."

This vetting process will include looking at the calculations used by Target PropCo to arrive at the contentious $1.9-billion number, which is yet to be available to creditors.

But Brzezinski says the court has promised creditors access to this information, as part of the transparent review of the claim led by the monitor.

The court also approved the sale of 11 of Target Canada's leases back to two of Canada's biggest commercial landlords.

The sale of these leases were only made possible by ending the agreement Target Canada had with its own property management company, which triggered the $1.9 billion claim.

Prime retail space—including the Square One Shopping Centre in Mississauga, Ont. and Place Laurier in Quebec City—will be sold back to Oxford Properties Corp. and Ivanhoe Cambridge Inc.

The purchase price is described as belonging in the "high-end" of its value range but remains undisclosed until the deal is finalized.

Here is a list of the stores being sold back to Oxford Properties and Ivanhoe Cambridge: