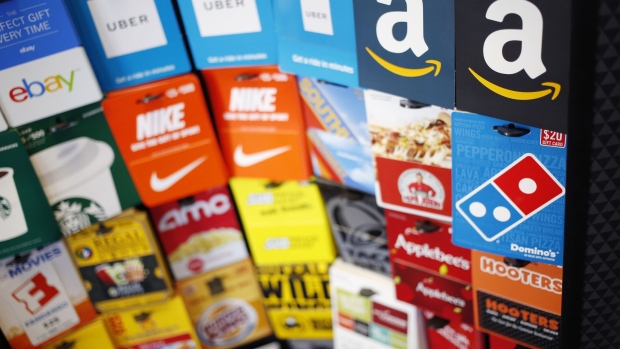 Which is good, because they're about to get lots of them.

In an economy hamstrung by all types of global supply-chain snarls, mounting product shortages — even Apple is reportedly slashing production — are making giving gift cards a fail-safe way to ensure there are presents under the Christmas tree. Shoppers plan to boost spending on them by 27% this holiday season to about $270 per person, according to a survey by payment service Blackhawk Network. Those gains will push cards to about 40% of their total gift purchases.

“This holiday season is going to be huge” for gift cards, said Saumil Mehta, general manager for Square Inc.’s point-of-sale division. They aren’t “as free-form as just handing someone a wad of cash. But it's not so specific either. It kind of comfortably sits in the middle.”

If this gift card boom does materialize, recipients are likely to welcome it. The gift card has come a long way this century, morphing from an almost thoughtless offering from that distant relative or corporate boss to what many Americans, especially younger ones, want most of all.

“It's kind of crass to give someone $20,” said Jonathan Zhang, a marketing professor at Colorado State University. “It's a lot more elegant to write a holiday card and include a gift card.”

For the giver, gift cards also remove the anxiety of picking out an item for a friend or family member from the endless aisles of the internet. About 75% of millennials prefer to receive gift cards over physical presents, according to Blackhawk.

Take Mollie Fierston, who at 24 borders the millennial and Generation Z cohorts. She used to make out detailed lists for her parents, but now she’d rather receive a gift card and shop for herself.

“Trends move so fast,” she said recently while perusing clothes at a Zara location in Manhattan. Younger Americans are “just hard to shop for.”

The global prepaid card industry surpassed $2 trillion last year thanks to gains in gift cards, according to estimates by Global Industry Analysts. With that accelerated growth, the market should hit $4.1 trillion by 2027, about 50% higher than the firm’s pre-pandemic estimate.

Retailers are also playing a role, increasingly using gift cards to attract new customers and push shopping past December into the lulls of January and February, according to Zhang, the marketing professor. Gift cards create a sales lift, too, because shoppers often spend more than the card is worth. And if they don’t redeem all of the value, that’s good for a retailer’s bottom line, he said.

On average, consumers spend 40% more than the value of a gift card, said Theresa McEndree, Blackhawk’s global head of marketing.

Gift cards were first adopted by department stores in the 1930s and experienced a surge when retailers transitioned to plastic vouchers in the 1990s. Nowadays, more than half of U.S. retailers offer them, Zhang said.

Starbucks Corp. has had immense success with gift cards. In the two decades since it began selling them, the chain has released more than 1,100 designs, from cards made of recycled coffee bags to ones adorned with real Swarovski crystals. Gift cards account for about half of the company’s in-store transactions in the U.S. and Canada, with roughly $4.8 billion loaded on them in the past two quarters in the region.

Other companies have expanded beyond the traditional card. Barnes & Noble Inc. is offering them inside a physical copy of the classic short story “The Gift of the Magi” as supply-chain issues threaten to keep some best-sellers off shelves this holiday season. This combination of tradition and flexibility appeals to young shoppers, said Chief Merchandising Officer Jackie De Leo. Some publishers are even moving book releases to after the holidays to take advantage, she said.

“We can see that the week after Christmas our young adult and middle-aged sales go up tremendously,” De Leo said. Publishers increasingly want to “capitalize on the gift card.”