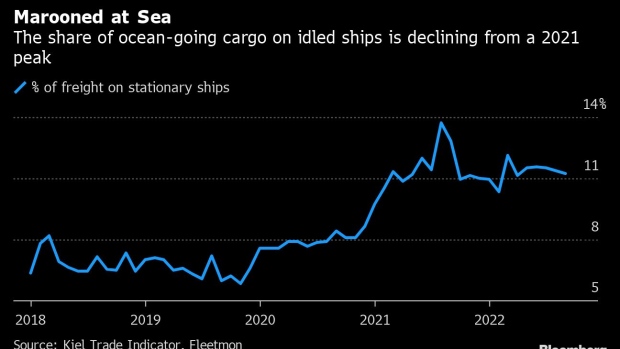 Few observers have had a better perch to watch the pandemic slowly clog — and now free up — one of the biggest arteries of global trade than Captain J. Kipling “Kip” Louttit.

Two years ago this week, as fully loaded container ships congregated off the coast of Southern California, Louttit’s team of marine traffic managers for the ports of Los Angeles and Long Beach started keeping daily records on a spreadsheet that today measures 736 lines and 13 columns. Their mission: organize a queuing system to ensure that vessels as long as the Empire State Building is tall navigated San Pedro Bay in a safe and orderly way.

The bottleneck started with five ships on Oct. 15, 2020, then pushed past 40 in February 2021 as Americans snapped up merchandise for their Covid confinement. The line dipped to nine in June 2021, then swelled above 60 this time last year before peaking at 109 in January. But like many benchmarks of supply-chain pressure lately, this one is dwindling. Just eight ships were on the arrival manifest as of late last week.

Even Louttit’s staff feels relief from the pressure.

“Our workforce is now managing reasonable levels, and the stress level is down,” said Louttit, a former Coast Guard officer who’s the executive director of the Marine Exchange of Southern California & Vessel Traffic Service Los Angeles and Long Beach. “We're back to being in a good place.”

In supply chain circles battered by two years of chaos, the word “normal” is creeping into the outlook for 2023. According to the latest Logistics Managers’ Index, “September’s future predictions hint at normalization and a return to business as usual over the next year.”

That’s not to say everything will soon be running smoothly across the global economy. Companies still struggle with shortages of parts and workers. Fragile supply chains are heading into another holiday season vulnerable to shocks ranging from freakish weather and dockworker strikes to China’s Covid lockdowns and Russia’s war in Ukraine.

“International transportation capacity has improved markedly,” said Jason Miller, an associate professor of supply chain management at Michigan State University who cautions about getting too optimistic about the speed of the recovery. For US companies trying to secure raw materials and components, “things are still bad and haven’t improved substantially,” he said.

The following charts show how much progress has been made toward ending the gridlock, starting with analysts at Copenhagen-based Sea-Intelligence. They noted in a report last week that about half of the shipping congestion has been resolved, and by one measure, “a full reversal to normality should come in March 2023.” Another Sea-Intelligence model that compares the current situation to snarls experienced in 2015 concurred that “normal” is within reach in early 2023, barring any more unexpected disruptions:

Evidence of the shipping slowdown is also seen in weekly traffic figures at the busiest US port in Los Angeles, where 17 container ships were berthed on Thursday, compared with about 30 in early 2022. The downturn has been gradual and nearby intermodal depots are still working through backlogs, but weekly import volumes lately are coming in lower than year-earlier levels. Part of it can be blamed on earlier-than-expected inventory stockpiling this summer, as well as the rerouting of goods through East Coast ports to avoid a possible strike:

Port congestion is also on the mend in Germany, according to the latest reading of the Kiel Trade Indicator. The reason has as much to do with demand as it does improvements on the supply side. “September trade has been characterized by weak demand for goods from China through Europe and North America,” according to Vincent Stamer, head of Kiel’s trade gauge. But there’s still work to be done to free up cargo that’s bogged down globally on waiting ships, with some of Kiel’s numbers showing many freighters still stuck:

Bloomberg Economics was among several groups of private-sector forecasters to publish a supply stress monitor, and our global heat map shows conditions cooling from the pressures that were flashing red at the start of this year. Metrics like delivery times and producer prices have come off their peaks, and most are trending toward yellow and green:

Similarly, an Oxford Economics indicator of supply strains in the US peaked in February and has slowly but steadily improved through September. It helps that consumers in developed economies are cinching their purse strings. “Supply chain conditions should stay on a more encouraging trajectory in the final stretch of 2022 and in 2023. One of the benefits of weakening demand is it will ease stress in supply chains,” said Oren Klachkin, Oxford’s lead US economist.

Even the custodians of the global financial system are watching, with the Federal Reserve Bank of New York launching its own Global Supply Chain Pressure Index in January. The measure showed September marked the fifth straight month of declines, a broad-based improvement led by a decline in charter rates for container ships. The index’s overall trajectory this year suggests “that global supply chain pressures are beginning to fall back in line with historical levels:”

By some measures, the untangling of transport snarls is happening just as fast as the system knotted up last year. That’s not welcome news for companies that have prospered in the chaos. Spot rates for shipping containers have plunged about 60% this year as carriers struggle with the opposite problem they faced a year ago — excess capacity. Like airlines that cancel half-booked flights, the carriers are reducing the number of individual voyages in a practice called “blank sailings” — or cutting entire service loops altogether — to match their available space with demand, according to figures from Drewry:

For cargo owners, the falling rates are soothing the sting of the record-high prices of the past two years. But it’s also bringing an end to the most profitable period in container shipping history. Moody’s Investors Service last week cut its outlook for the industry to negative from stable as the supply-demand imbalances lurch back to the carriers’ disadvantage in a weaker global economy.

New ships launching in 2023 and 2024 may hasten the industry’s reversal of fortunes. The order-book-to-fleet ratio of 28% is the highest since 2010, according to Moody’s, and that increase in capacity will exceed projections for global trade volumes. “Although service reliability issues and elevated freight rates will likely persist into 2023 as the transportation ecosystem continues to right itself, we believe that carriers’ earnings have now peaked as an increased supply of vessels meets weakening demand,” the Moody’s report stated. Here’s how that mismatch looks this year and next: