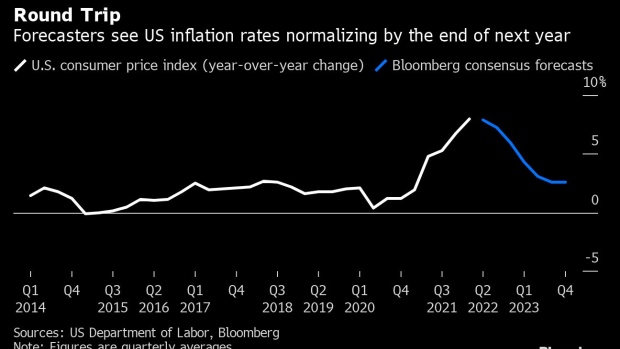 That means the only quick fix available to Federal Reserve Chair Jerome Powell and his colleagues for cooling the fastest inflation in four decades may be raising interest rates so much that they crash the economy into recession.

Such a scenario is the worry of some economists who see it as the only way the Fed can suppress demand by enough to offset the supply-side forces driving up inflation over which the central bankers have no control.

That’s harsh news for the many thousands of Americans who could potentially lose their jobs or fail to find work as part of Powell’s calculus of rebalancing supply and demand.

“The phenomenon we are going through is global,” said William Spriggs, a professor at Howard University and the chief economist for the American Federation of Labor and Congress of Industrial Organizations. “It’s caused by the global supply chain being totally ripped apart and disrupted, and nothing he does can address that.”

By the end of 2021 -- based on analysis of U.S. fiscal measures versus other countries -- between a third and half of the inflation in excess of the Fed’s 2% target could be attributed to demand, according to Anna Wong, the chief US economist at Bloomberg Economics. Since then, with Russia’s invasion of Ukraine and Covid lockdowns in China, the balance of inflationary pressures has tilted further toward supply-side drivers.

To make matters worse, some of the most-affected prices -- like those for food and gasoline -- are ones for which demand is most “inelastic,” because they’re so essential. And that means the central bank would have to induce extraordinary declines in economic activity to start having an impact on them.

Minutes of the Fed’s May 3-4 meeting, published at 2 p.m. in Washington, could shed more light on the inflation-dynamics debate.

Powell captured the Fed’s narrowing view of the situation on May 17 when he explained that “this is not a time for tremendously-nuanced readings of inflation.”

That marks a complete turnaround from a year ago, when officials frequently pointed to specific reasons -- “transitory” in nature -- why certain prices were going up as they justified keeping interest rates near zero.

It also cuts against longstanding wisdom in economics that central banks should “look through” supply shocks because their effects on inflation will be temporary, and monetary policy isn’t well-equipped to deal with them.

In the meantime, though, fast-rising prices are dominating the political conversation ahead of November’s midterm elections and polls show Americans are unhappy with the economy. That helps explain the Fed’s shift as President Joe Biden points to the central bank as part of the solution to higher prices.

“There’s a politics to inflation. It has been talked about incessantly, and it is being weaponized,” said Julia Coronado, President of MacroPolicy Perspectives. “There’s a narrative, and the Fed isn’t immune to that narrative.”

The change in the way Fed officials are talking about the inflation problem has involved re-framing it as one not just of supply but also -- or even primarily -- of demand: Yes, unusual interference in global supply chains is boosting prices. But massive government pandemic aid that left many households flush with cash -- plus rising wages amid a tight labor market -- is also keeping inflation too high.

That perspective implies a more direct role for the central bank, which by lifting borrowing costs can influence investment and hiring throughout the economy and thereby dampen spending.

Powell said on May 17 that “there could be some pain involved in restoring price stability,” suggesting the unemployment rate may rise “a few ticks” from the 3.6% level it registered in April as the Fed tightens.

But engineering only a slight increase in the unemployment rate is akin to walking a tightrope, according to Ellen Zentner, the chief US economist at Morgan Stanley.

The S&P 500 index of US stocks has fallen around 18% from the record high set in early January as the Fed has shifted, while 10-year Treasury yields have advanced to 2.75% from around 1.5% late last year.

These outcomes, which mirror the Fed’s increasing willingness to risk a recession to control inflation, have become explicit goals for US central bankers, who see financial markets as the channel through which they influence the economy.

Even Neel Kashkari, the Minneapolis Fed president who since joining the central bank in 2016 has often been one its most dovish policy makers, suggested on May 17 that inducing a downturn may ultimately be necessary if supply-chain problems don’t improve, adding that it’s “easy to be a hawk” with inflation as high as it is now.

Spriggs pointed to the approach being taken in Europe, where governments are authorizing income transfers to low-income households to help them weather higher food and energy prices, as a better alternative. He suggested that’s off the table in the US in part because the inflation problem has been re-framed as owing to excessive spending.

“The Fed needs a more responsible way of explaining to people the basic economics,” Spriggs said. “The solution can’t be that we don’t buy anything just because we have a supply shock.”