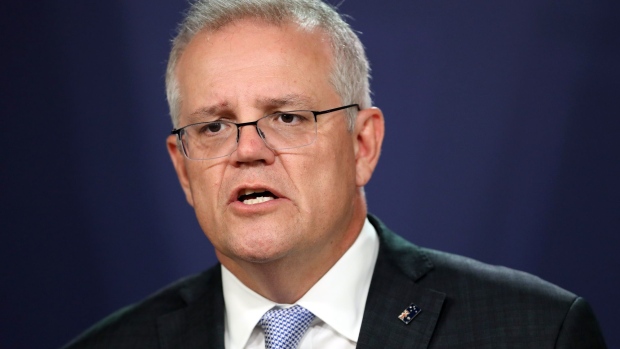 (Bloomberg) -- Australia’s Liberal National Coalition government has seen its approvals fall to the lowest point since April last year in a new opinion poll, in the latest sign of eroding support for Prime Minister Scott Morrison’s handling of the omicron surge during an election year.

The primary vote for the center-right Liberal and National parties dropped to 34% in a poll carried out by Resolve Strategic and published in Australia’s newspapers on Tuesday. It is the government’s worst result in the poll since it began in April and the first time the coalition has trailed the opposition Labor Party, whose support stood at 35% in the survey.

Morrison is required by law to call an election before May 21 at the latest. The survey results come after a rapid rise in Covid-19 cases across Australia in recent weeks, sparked by the highly-contagious omicron variant, leading to shortages of testing equipment and supply chain issues.

Compared to the last Resolve poll taken in November, approval of the Morrison government’s handling of the Covid-19 pandemic has fallen in January, from 36% to 32%. The government is also less trusted now on economic management, border restrictions and jobs and wages. The poll has a maximum margin of error of 2.5%.