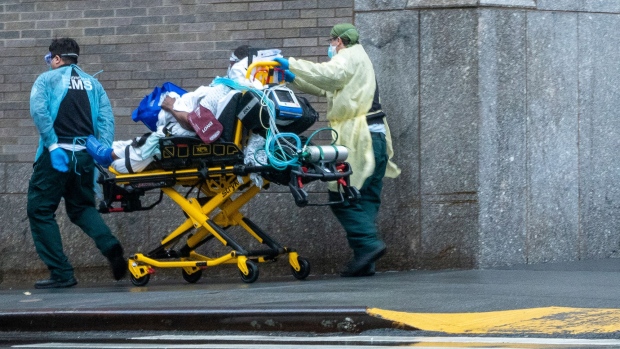 EMS workers transport a patient on the side walk outside of Mount Sinai hospital on April 13, 2020 in New York City. , Photographer: David Dee Delgado/Getty Images

(Bloomberg) -- The US Supreme Court turned away a challenge to New York’s Covid-19 vaccine requirement for health-care workers, rejecting an appeal from 16 people who objected to the shot on religious grounds.

The rebuff leaves in place a requirement that opponents said caused 37,000 doctors, nurses and other health-care workers to lose their jobs.

New York is one of three states, along with Maine and Rhode Island, that require vaccinations in the health-care industry without allowing a faith-based exemption. New York’s mandate requires people to be vaccinated if they are in close contact with patients, residents or co-workers. The rule exempts people who have a medical reason for not getting vaccinated.

The Supreme Court has allowed state and local vaccine mandates, though it has curbed federal authority to impose requirements. The justices in January blocked a Biden administration rule that would have required shots or regular tests for more than 80 million employees of large businesses, while allowing a more targeted vaccine mandate for some health-care workers.

The high court rebuff is the second for a group of providers who tried unsuccessfully to get exemptions last year. They said in court papers that 10 of them have lost their jobs and five have gotten shots under protest. Only one, a doctor who received a medical exemption, remains on the job without getting vaccinated.

The group said the state is violating the Constitution by allowing exemptions for medical reasons but not religious ones. The mandate “targets and forbids religious conduct, while permitting otherwise identical secular conduct,” the group said in court papers.

New York Governor Kathy Hochul countered that “the presence of a single, limited medical exemption to a vaccine requirement does not require the state to provide a blanket religious exemption from vaccination.”

The New York-based 2nd US Circuit Court of Appeals sided with the state.

The providers said they are Christians opposed to vaccines that have links to cell lines derived from aborted fetuses. The Moderna Inc. and Pfizer Inc. mRNA vaccines were tested using a cell line that originated with an aborted fetus in the 1970s. The Johnson & Johnson vaccine uses a different cell line during production and manufacturing. None of the vaccines contain aborted fetal cells.