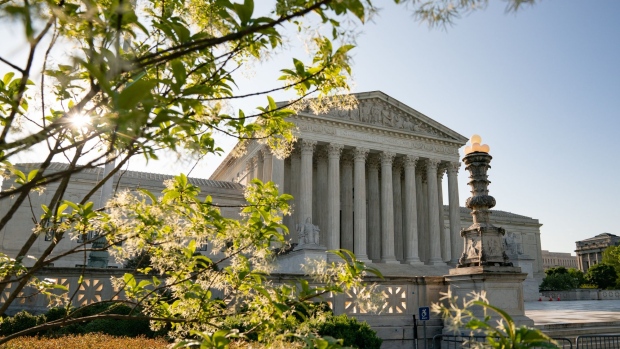 The sun rises behind the U.S. Supreme Court in Washington, D.C., U.S., on Tuesday, May 4, 2021. The fate of President Biden's $4 trillion economic vision for the U.S. now rests with the lawmakers turning his infrastructure and social-spending plans into legislation that can get through a narrowly divided Congress. Photographer: Erin Scott/Bloomberg , Bloomberg

(Bloomberg) -- The U.S. Supreme Court is offering hints of the kind of paradigm shift conservatives have long craved by adding major abortion and gun-rights cases to its docket.

Seven months after Amy Coney Barrett became the third Donald Trump appointee on the court, it’s moving to address some of the top items on longstanding conservative wish lists. In the coming weeks, the justices could also add an affirmative action showdown to the mix, giving them a trio of hot-button clashes for the nine-month term that starts in October.

With Barrett on board, the court has already used emergency appeals from churches fighting pandemic restrictions to significantly strengthen religious rights. Now liberals have reason to worry that the newest cases, which include an attack on the landmark Roe v. Wade abortion rights ruling and a call for a constitutional right to carry a gun in public, signal that the court’s conservatives are ready to begin a legal transformation.

“From their perspective, why wait?” said Leah Litman, a constitutional law professor at the University of Michigan law school and frequent critic of the court’s conservatives. “There are certain things you get appointed to do -- and for movement conservative lawyers that’s limit or overrule Roe, expand the Second Amendment and invalidate affirmative action.”

The abortion case centers on a Mississippi law that would ban the procedure in almost all cases after 15 weeks of pregnancy. Because that issue wasn’t one that had divided the lower courts, the justices could easily have turned away Mississippi’s appeal and awaited a less sweeping abortion case.

Instead, at least four justices -- the number required to grant review -- voted to consider arguments that go to the core of Roe and the 1992 Planned Parenthood v. Casey follow-up ruling.

The Casey decision said the decision to terminate a pregnancy is fundamentally the woman’s until the fetus becomes viable, a moment the court suggested was around 23 or 24 weeks. Mississippi is asking the court to toss out the viability standard and give states broad new power to restrict abortion at earlier stages of pregnancy.

Although the appeal doesn’t directly ask the court to overturn Roe and Casey, abortion opponents hailed the move as a step in that direction. “Hey hey, ho ho. Roe v. Wade is going to go!” tweeted Kristan Hawkins, president of Students for Life of America.

The decision follows the court’s announcement last month that it will use a New York case to consider whether the Constitution guarantees most people the right to carry a handgun in public for self-defense. The grant of review ended a decade-long bout of frustration for gun-rights activists, who had repeatedly asked the court to take up another major Second Amendment case.

Some conservatives had been growing restless that the court wasn’t moving faster after Barrett’s confirmation, said Curt Levey, president of the conservative Committee for Justice.

Before the gun and abortion cases, “there wasn’t any big news that would tell you the court had changed, even if there were subtle changes,” Levey said. “This is sort of the first time that the media and the left, and conservatives as well, have a sign that there might be some real change.”

Although the court doesn’t say which justices vote to hear a case, by all appearances the two newest members -- Barrett and Justice Brett Kavanaugh -- are making the difference. Both have indicated skepticism toward abortion rights, and both replaced justices -- the late Ruth Bader Ginsburg in Barrett’s case and the retired Anthony Kennedy in Kavanaugh’s -- who were supportive.

And both Barrett and Kavanaugh are likely be more receptive toward Second Amendment claims than their predecessors. Although Kennedy supported constitutional gun rights, he wasn’t as outwardly eager to reinforce them as Kavanaugh, who last year called on the court to take up a new case. Kavanaugh also joined an opinion by Justice Clarence Thomas that described gun-carrying restrictions as imposing “an onerous burden on a fundamental right.”

The court could say next month whether it will hear an appeal that seeks to bar universities from using race as an admissions factor. The appeal, which challenges Harvard College’s affirmative action policies, asks the court to overturn the 2003 ruling that let universities keep using race-conscious admissions to diversify their student bodies.

Harvard on Monday filed a brief urging the court not to take up the case, saying opponents had offered “no legitimate justification for such an extraordinary step.”

But liberals may have an even tougher fight in that case because the court’s sixth conservative, Chief Justice John Roberts, has long criticized what he sees as special protections for racial minorities.

It’s “more likely that not” the court will take that case aswell, Litman said.