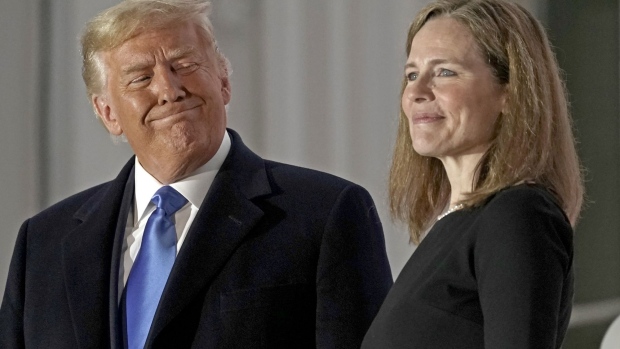 Pro-life and pro-choice demonstrators outside of the U.S. Supreme Court in Washington, D.C., on Nov. 1. Photographer: Samuel Corum/Bloomberg , Bloomberg

(Bloomberg) -- The fate of abortion rights in the U.S. rests with a Supreme Court that now has a 6-3 conservative majority. Three of the six conservatives were appointed by then-President Donald Trump, who promised during his first campaign to nominate only anti-abortion justices.

The court will hear arguments Wednesday in a Mississippi appeal that asks the court to overturn Roe v. Wade, the 1973 decision that legalized abortion nationwide. Mississippi is defending its ban on abortion after 15 weeks of pregnancy, a far more stringent restriction than any the Supreme Court has previously upheld.

Here is who’s who on the nation’s highest court, starting with the justices most likely to vote to discard Roe:

Thomas has made no secret of his longstanding desire to overturn Roe. He wrote in 2000 that Roe was “grievously wrong.” Twenty years later, he said that the court “created the right to abortion out of whole cloth, without a shred of support from the Constitution’s text.”

Gorsuch hasn’t directly advocated overturning Roe, but has sided with abortion opponents when given the chance. He’s been quicker to discard precedents than his fellow Trump appointees, Brett Kavanaugh and Amy Coney Barrett. When Barrett and Kavanaugh declined to overturn a ruling limiting religious rights this year, Gorsuch was critical, saying the court lacked the “fortitude” to give a clear answer.

Like Gorsuch, Alito has been a consistent vote against abortion rights but hasn’t directly called for Roe to be overturned. In a speech this year, he bristled at suggestions that he and the court nullified Roe when they let Texas start banning abortions after six weeks. “We did no such thing,” he said.

Before becoming a judge, Barrett was a staunch critic of Roe. She signed a 2013 newspaper ad that called Roe “infamous” and said abortions had killed “55 million unborn children,” as well as a 2006 ad that said signatories “oppose abortion on demand and defend the right to life from fertilization to natural death.”

Kavanaugh refused to characterize Roe as “settled law” during his 2018 Senate hearing, saying only that it is “settled as a precedent of the Supreme Court.” He has voted to overturn precedents three times since joining the court, and said the bar for doing so should be “high” but “not insurmountable.”

The chief justice stands alone as having voted on both sides of abortion cases. Roberts was in dissent when the court struck down a Texas abortion restriction in 2016. Four years later, he voted to strike down a near-identical Louisiana rule, saying he was bound by the earlier ruling but at the same time laying out a legal test likely to favor abortion restrictions in future cases. He joined the court’s liberal wing in voting to block Texas’ six-week abortion ban this year.

Breyer has written each of the court’s biggest abortion-rights rulings over the past quarter century. Those include a 2000 decision that struck down Nebraska’s ban on a procedure opponents called “partial-birth” abortion, and the 2016 Texas ruling, which invalidated a law that would have imposed new rules on facilities and doctors and closed most of the state’s clinics. The court’s conservative wing has since chipped away at those rulings.

A consistent vote in favor of abortion rights, Sotomayor blasted the majority when it let the Texas six-week ban take effect. She called the law “a breathtaking act of defiance -- of the Constitution, of this court’s precedents, and of the rights of women seeking abortions throughout Texas.”

Like Breyer and Sotomayor, Kagan has defended abortion rights, calling the Texas law “patently unconstitutional.” She is the court’s staunchest advocate of stare decisis, the legal doctrine that says the justices will follow their precedents absent compelling reasons.