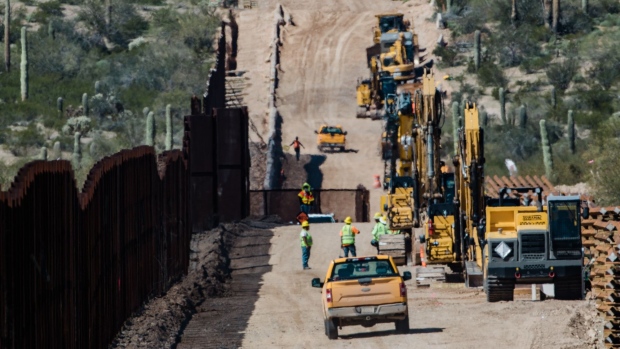 (Bloomberg) -- The U.S. Supreme Court let work continue on President Donald Trump’s border wall, rejecting calls to block some of the construction in a clash over the use of Pentagon funds to build the fencing.

The justices, voting 5-4, with no explanation, refused to revisit a year-old order in which they cleared construction to start during the litigation. The rebuff is a setback for advocacy groups represented by the American Civil Liberties Union, which sued to block segments totaling 130 miles (209 kilometers) in Arizona, New Mexico and California.

Most of those segments have been built over the past year, but the groups were asking the Supreme Court to stop construction of the last 40 miles.

The high court action is a boost for Trump as he rushes to complete as much wall as possible in the run-up to the November election and the January end of his current presidential term.

Lower courts have ruled that the administration violated the law by diverting money originally appropriated for other Defense Department purposes. A divided Supreme Court last year put on hold one of those rulings, a decision from a federal trial judge in Oakland, California, involving $2.5 billion in disputed funds.

The Sierra Club and Southern Border Communities Coalition asked the high court to lift that stay order. The groups said the order had been in effect for so long it might let the administration complete the entire 130-mile project without the Supreme Court ever addressing the merits of the lawsuit.