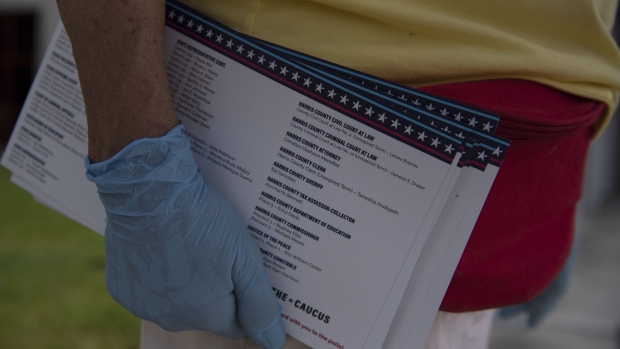 A volunteer passes out information on various candidates at an early voting polling location for the 2020 Presidential elections in Houston, on Oct. 13. , Bloomberg

(Bloomberg) -- The U.S. Supreme Court turned away a Democratic bid to force universal vote-by-mail in Texas, leaving intact a state law that lets people cast no-excuse absentee ballots only if they are 65 or older.

The Texas Democratic Party and its allies argued unsuccessfully that the law violates the Constitution’s 26th Amendment, which says the right to vote “shall not be denied or abridged by the United States or by any state on account of age.”

Voting by mail became a sharply partisan issue amid President Donald Trump’s unsupported contentions that the practice led to widespread fraud in the November election. Texas’s Republican governor and attorney general urged the Supreme Court to reject the Democratic appeal.

A divided federal appeals court in September rejected the 26th Amendment claim, saying the Texas law didn’t make it more difficult for anyone to vote. The panel left open the possibility the law could be challenged as a violation of the Constitution’s equal protection clause.

The Supreme Court also rejected Texas Democrats in June, when the justices refused to reinstate a trial judge’s order that would have let any voter request an absentee ballot to avoid the risk of contracting Covid-19. That order, which was blocked by the appeals court, was designed to govern the 2020 election and might have boosted Democrats’ prospects.

The 26th Amendment, which was ratified in 1971, extended the right to vote to people 18 and over.