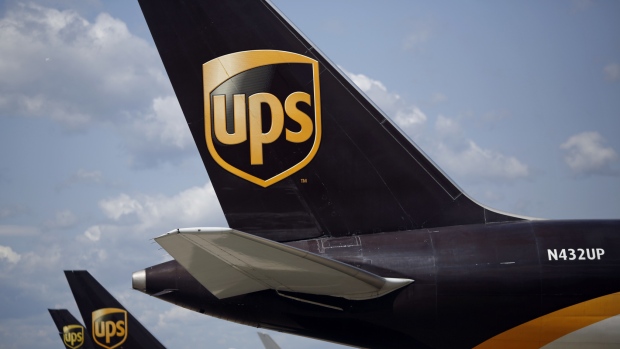 Cargo jets sit parked on the tarmac while being unloaded during the afternoon sort at the United Parcel Service Inc. (UPS) Worldport facility in Louisville, Kentucky, U.S. , Bloomberg

(Bloomberg) -- The U.S. Supreme Court turned away a United Parcel Service Inc. appeal that aimed to force the U.S. Postal Service to raise its prices for delivering packages.

The justices, without comment Monday, left intact an appeals court decision upholding the government’s method for determining how much the Postal Service can charge for parcels. The rebuff is a victory for online retailer Amazon.com Inc., which relies on the Postal Service for deliveries and backed it in the court case.

UPS, which competes with the Postal Service in the package-delivery business, says its rival has an unfair advantage because the pricing method doesn’t track the true cost of delivering packages.

“Postal pricing has departed from Congress’s requirement that the Postal Service compete on a level playing field with private companies for package delivery,” UPS argued in its appeal.

UPS ultimately may get some of what it’s seeking through a different means. A task force appointed by President Donald Trump is recommending the Postal Service raise package prices. Trump created the panel after repeatedly criticizing Amazon and its founder, Jeff Bezos.

At the Supreme Court, however, the Trump administration urged the justices to leave the Postal Regulatory Commission rate formula intact.

The appeal asked the Supreme Court to overturn the so-called Chevron doctrine, which requires judges to generally defer to regulatory agencies on the interpretation of federal statutes. The Trump administration and Amazon said that legal doctrine wasn’t central to the case.