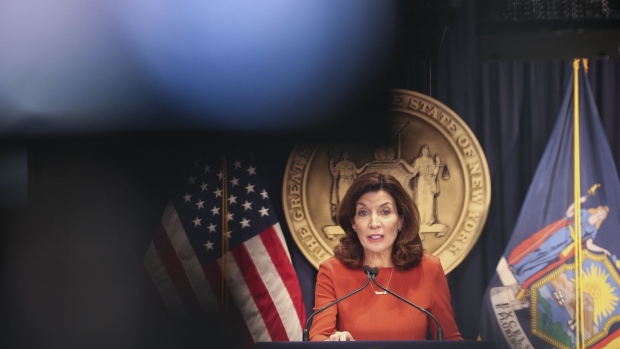 (Bloomberg) -- New York Governor Kathy Hochul said the US Supreme Court’s ruling striking down gun-carry limits is “frightening” and strips away the state’s right to protect its citizens.

“This decision isn’t just reckless, it’s reprehensible,” she said. “This could place millions of New Yorkers in harm’s way.”

Hochul, speaking at a school-safety bill signing in New York City, said she intends to call the state Legislature back into session to pass new bills in response to the ruling, which would look at implementing restrictions on carrying guns in “sensitive locations,” training requirements and ways that businesses and private property owners “have the right to protect themselves.”

“We’re not powerless in this situation,” she said. “We are not going to cede our rights that easily.”

Hochul spoke while signing Alyssa’s Law, which would require school districts to consider installing panic alarm systems. The bill is named for a student who was shot and killed at a high school in February 2018.

“We do not need people entering our subways, our restaurants, our theaters with concealed weapons,” she said Thursday. “We don’t need more guns on our streets.”