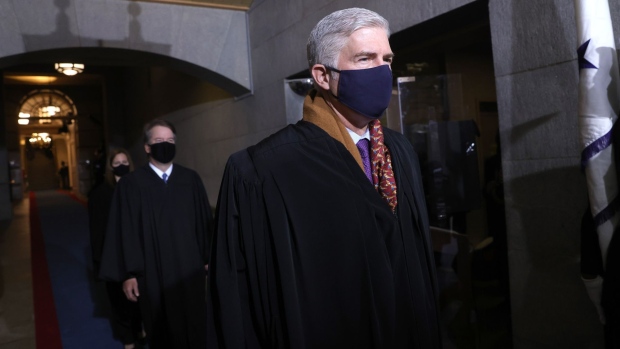 Neil Gorsuch, associate justice of the U.S. Supreme Court, arrives for the 59th presidential inauguration in Washington, D.C., U.S., on Wednesday, Jan. 20, 2021. Biden will propose a broad immigration overhaul on his first day as president, including a shortened pathway to U.S. citizenship for undocumented migrants - a complete reversal from Donald Trump's immigration restrictions and crackdowns, but one that faces major roadblocks in Congress. , Bloomberg

(Bloomberg) -- Two Supreme Court justices issued a rare statement Wednesday over what is for many Americans a common refrain -- whether their coworkers should wear a mask.

Justice Sonia Sotomayor, 67, who has been taking part in U.S. Supreme Court arguments remotely amid the Covid surge, said she did not ask Justice Neil Gorsuch to wear a mask during arguments.

National Public Radio reported on Tuesday that Chief Justice John Roberts had asked all justices to wear masks but that Gorsuch refused. Sotomayor is a diabetic and may face more health risks from Covid.

The two justices said Wednesday hat “while we may sometimes disagree about the law, we are warm colleagues and friends.”

Fox News early Wednesday said it debunked the claim from the more liberal NPR, citing its own sources and a former Gorsuch law clerk as saying neither Roberts nor Sotomayor had asked colleagues to wear masks.

“Fact Check: 100% False. The Chief never asked his colleagues to mask up, for any reason,” tweeted Mike Davis, a former Gorsuch law clerk.

The court’s jurists remained mum about the situation during arguments Wednesday in a case involving federal election law and loans a senator gave his campaign. No one said a word about masks. Gorsuch was the only justice without a mask although others took them off occasionally during the arguments.

Reporters in the courtroom and lawyers arguing before the court are required to wear the face coverings.

The situation is all the more odd because Gorsuch and Sotomayor sit next to each other on the Supreme Court bench and previously bantered in a friendly manner. Even though Gorsuch is more conservative on issues and Sotomayor is now regarded as the most liberal on the court, the two have previously attended the same virtual events and joined together in calling for a return to civil discourse.

Last April, they lamented at an event about the nation’s collective inability to listen to one another, calling it a national security threat in a politically fractious time.

“This is the scariest of times, and the most exciting of times,” Sotomayor said in the recorded video conversation. “We had one of highest turnouts in voting the last election. Yet at the same time we see some of the cracks in our system.”

Gorsuch said that democracy is “not an automatic thing” and could crumble if Americans don’t tend to it.

“Our enemies know this, even if we don’t,” he said. “And it is no surprise that a lot of the false information spread on social media is deliberately spread by our enemies to sow disagreement internally in the country.”