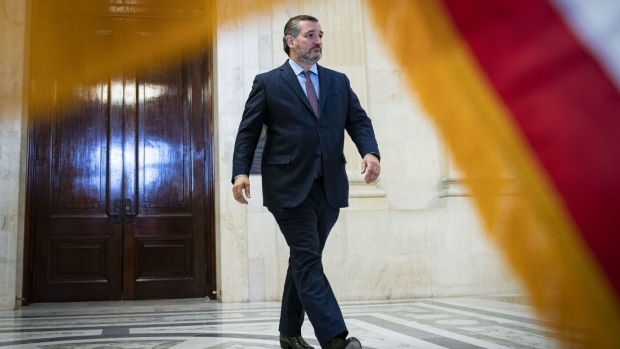 Senator Ted Cruz, a Republican from Texas, departs following the Republican policy luncheon on Capitol Hill in Washington, D.C., U.S., on Tuesday, Jan. 11, 2022. Senate Democrats and Republicans will meet privately today to continue discussing their separate strategies ahead of action this week on voting rights legislation and a possible accompanying change to long-standing filibuster rules. , Bloomberg

(Bloomberg) -- The U.S. Supreme Court signaled interest in rolling back campaign-finance restrictions, voicing skepticism about a provision regulating the repayment of candidate loans in a clash stemming from Senator Ted Cruz’s 2018 re-election campaign.

Hearing arguments in Washington, a number of the court’s conservative justices suggested they see the restriction as violating the free speech rights of candidates and their donors. The provision says that campaigns can use money donated after the election to repay candidate loans only up to $250,000.

Justice Brett Kavanaugh called the $250,000 cap “a chill on your ability to loan your campaign money.”

The Biden administration says the cap helps prevent corruption by curbing donations that will personally enrich someone who has just won election.