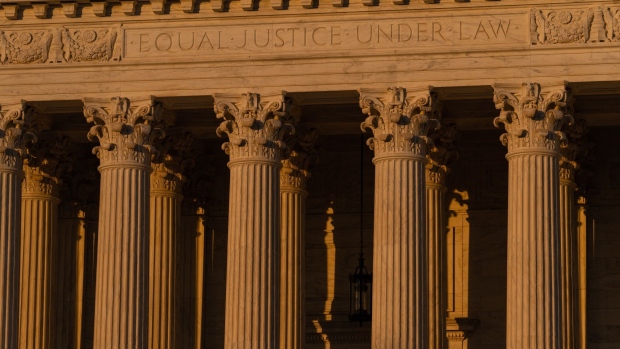 The US Supreme Court in Washington, D.C., US, on Monday, June 27, 2022. A CBS News poll suggested that a majority of Americans disapprove of the Supreme Court's decision overturning the constitutional right to an abortion, which is inflaming a partisan divide on display in comments by senior lawmakers. , Bloomberg

(Bloomberg) -- Key US Supreme Court justices expressed wariness about a far-reaching constitutional argument that would give state lawmakers more power to set the rules for federal elections.

Some members of the court’s conservative wing suggested they weren’t convinced by sweeping arguments being pressed by North Carolina Republicans in the redistricting case. Justice Amy Coney Barrett said the so-called independent state legislature theory could require the US Supreme Court to draw “notoriously difficult lines” separating legitimate state supreme court decisions from those that usurp the power of lawmakers.

Justice Brett Kavanaugh said the GOP arguments go beyond what three conservative justices laid out in a concurring opinion in the 2000 Bush v. Gore case, when they said the Florida Supreme Court had overstepped its authority by ordering ballot recounts.

Chief Justice William Rehnquist’s opinion in that case said federal court review “should be, in his words, deferential and simply should be a check to make sure that the state court had not significantly departed from state law,” Kavanaugh said. The court as a whole sided with George W. Bush on different grounds, sealing his election as president.

Lawyers opposing the theory said the Supreme Court can intervene only if a state court egregiously overstepped its authority.

“We don’t doubt that there is some review by this court in the most extreme circumstances,” said Neal Katyal, a lawyer arguing on behalf of Common Cause and the North Carolina League of Conservation Voters. “It’s just that the standard is incredibly high.”

Backers of the theory say it would ensure that elected representatives, not judges or administrators, are setting out the voting rules.

The debate stems from the Constitution’s elections clause, which says the rules for congressional races “shall be prescribed in each State by the Legislature thereof” unless overridden by Congress. A similar provision governs the appointment of presidential electors.

The central question is whether that phrase refers only to a state’s elected legislative body or instead to its broader lawmaking system, a category that includes officials authorized to make election-related decisions, citizens voting on ballot initiatives and courts exercising their traditional power to review laws.

Conservative justices expressed skepticism during Wednesday’s session about a North Carolina Supreme Court decision that said a congressional map drawn by the Republican-controlled General Assembly was so partisan it violated several provisions of the state constitution. Justice Neil Gorsuch said the North Carolina court “cited to a melange of open-ended” constitutional provisions.

Justice Samuel Alito suggested he read the ruling as usurping the power of the legislature.

“Basically they’re saying in no uncertain terms, ‘Look, there’s legislative malfunction here. The legislature’s adopted a political gerrymandering, and it’s really hard to amend the state constitution and we don’t have a referendum to correct it. So there’s a big problem in the state and we have to step in,’” Alito said.

“I think what might strike a person is that this is a proposal that gets rid of the normal checks and balances on the way big governmental decisions are made in this country,” Kagan said. “And you might think that it gets rid of all those checks and balances at exactly the time when they are needed most because legislators we all know have their own self-interest. They want to get re-elected.”

David Thompson, the lawyer representing North Carolina Republicans, responded that “checks and balances do apply, but they come from the federal Constitution and the panoply of federal laws like the Voting Rights Act and other statutes that are highly protective of voters.”

Chief Justice John Roberts questioned how Thompson’s argument could be squared with a 1932 Supreme Court decision that said a governor’s veto of a redistricting plan was part of the legislative process.

“Vesting the power to veto the actions of the legislature significantly undermines the argument that it can do whatever it wants,” Roberts said.

Thompson said a governor’s veto was a “procedural limitation” on the legislature’s power, contrasting it with what he said was the North Carolina Supreme Court’s “substantive limitation.”

Several justices, including Barrett, indicated they didn’t buy that distinction.

“Is your formalistic test just a way of trying to deal with our precedents or are you rooting that in the Constitution itself?” she asked Thompson. “Because you do have a problem with explaining why these procedural limitations are OK but substantively limitations are not.”

North Carolina’s lawyer, Donald Verrilli, said the independent state legislature theory shouldn’t even be an issue in the case because a North Carolina statute explicitly authorizes judicial review of congressional redistricting to ensure it complies with the state constitution.

That law “establishes conclusively that North Carolina courts do not in any way usurp the legislative function when they draw remedial maps in the manner that the statute prescribes,” Verrilli argued.

The theory “rejects all of this history and would wreak havoc in the administration of elections across the nation,” Prelogar argued.