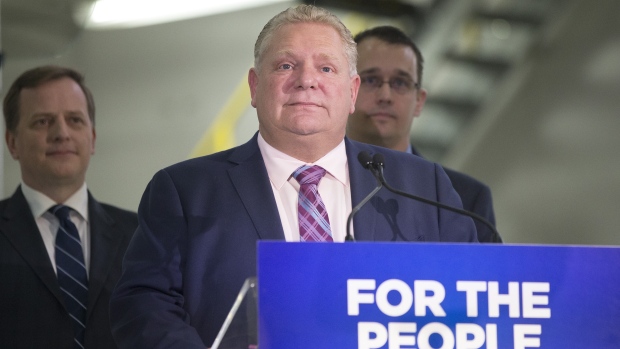 ntario Premier Doug Ford, centre, stands with Minister of Transportation Jeff Yurek, left, and Minister of Infrastructure Monte McNaughton during a news conference in Toronto on Wednesday, April, 10, 2019. Ford's ambitious plan for public transit in Ontario includes a Toronto downtown relief line that will be twice as long as the city is currently considering, be built two years earlier and cost billions more. , THE CANADIAN PRESS/Chris Young

OTTAWA - The Supreme Court of Canada will look at the legality of Ontario's decision to slash the size of Toronto's city council.

At the time, Ford -- a former Toronto city councillor and failed mayoral candidate -- said the move would improve decision-making and save $25 million.

Critics accused him of political interference and flouting democracy.

A provincial judge found the law unconstitutional, saying it infringed on the free-expression rights of candidates by affecting their ability to campaign, and those of voters by denying them the right to cast a ballot that could result in effective representation.

However, the Ontario Court of Appeal overturned the decision last year, prompting the city to seek a hearing in the Supreme Court.