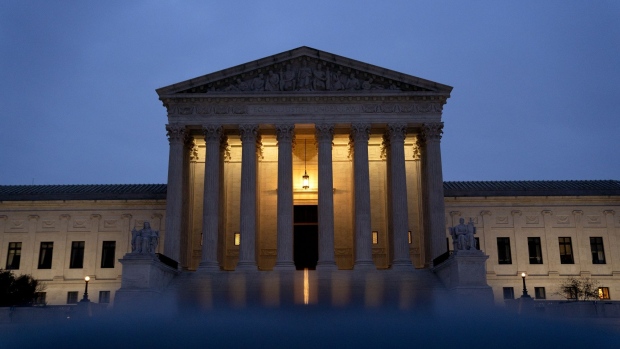 The U.S. Supreme Court Court in Washington, D.C., U.S., on Wednesday, Dec. 8, 2021. The House passed legislation Tuesday that would create a quick process to raise the U.S. debt ceiling by a simple majority vote in the Senate, approving a procedural measure on a 222 to 212 vote. Photographer: Stefani Reynolds/Bloomberg , Bloomberg

(Bloomberg) -- The U.S. Supreme Court, heeding calls from business and property-rights groups, agreed to use a long-running Idaho fight to consider curbing the reach of the Clean Water Act.

The justices said they will hear an appeal from Chantell and Michael Sackett, an Idaho couple waging a 15-year-old battle to build a house on land that federal regulators say is protected wetlands. The Sacketts won a 2012 Supreme Court ruling that let their lawsuit go forward.

The case becomes the second major environmental clash on the court’s docket. The justices next month will consider limiting the Environmental Protection Agency’s ability to address climate change through sweeping reductions of power-plant emissions.

The Supreme Court is likely to hear the case in the term that starts in October.

The new case could give companies a freer hand to discharge pollutants and let developers construct more new houses without getting a federal permit. The U.S. Chamber of Commerce and the National Association of Home Builders were among the groups urging the Supreme Court to hear the case.

The Sacketts’ appeal asks the court to revisit a 2006 Clean Water Act case, Rapanos v. United States, which failed to produce a majority decision and left uncertainty about the governing standard. Four justices, led by Antonin Scalia, said the law covers wetlands only if they have a continuous surface connection to a river, lake or other major waterway.

A fifth, Justice Anthony Kennedy, created his own test, saying the Clean Water Act covers wetlands with a “significant nexus” to one of those larger bodies of water.

In their appeal, the Sacketts say courts and regulators alike have struggled to figure out how the two standards intersect. The couple’s lawyers say the court should adopt Scalia’s test and clear up the confusion.

“Fifteen years of fruitless confusion, conflict, and litigation is enough,” the Sacketts argued in their appeal. “This court can and should chart a better course for the Clean Water Act by articulating a clear, easily administered, constitutionally sound rule for wetlands jurisdiction, using the surface-water-connection test set forth in the Rapanos plurality opinion.”

President Joe Biden’s administration urged the court to reject the appeal, arguing that the Sacketts were overstating the confusion and that the Scalia approach would create a regulatory gap.

Under the Scalia approach, “the agencies would lack authority to protect wetlands separated from a navigable river by a small dune or other natural barrier, even if overwhelming scientific evidence showed that the wetlands significantly affect the river’s chemical, physical, and biological integrity,” the administration argued in court papers.

The administration also told the justices they shouldn’t intervene until the EPA and Army Corps of Engineers finalize a proposed revision to the federal regulations that implement the key provision. The Clean Water Act, which took effect in 1972, gives the federal government control over “waters of the United States.”

The fight involves a 0.63-acre property near Priest Lake in northern Idaho. The property is about 300 feet (91 meters) from the lake and, on the other side, across a road from a tributary of a creek that feeds into the lake. The EPA says that the land is connected to the lake through a subsurface flow of water.

The legal fight began in 2007 when the EPA issued an administrative compliance order requiring the Sacketts to restore land they had already begun preparing for construction.

The case has been bouncing up and down the court system since then. A federal appeals court last year said the Clean Water Act covered the property, prompting the Sacketts to turn to the Supreme Court a second time.