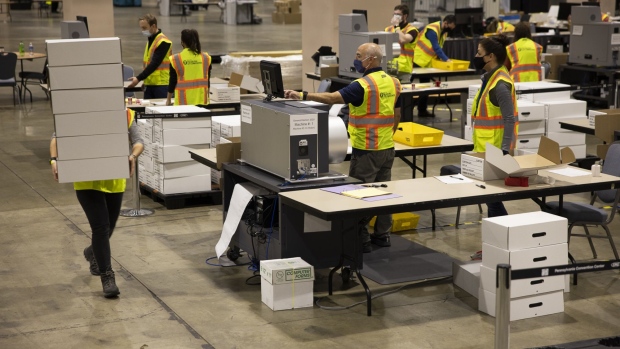 (Bloomberg) -- The U.S. Supreme Court turned away two Republican appeals over the deadlines for mail ballots in Pennsylvania, declining to use a lingering dispute over the 2020 election to reset the rules for future presidential contests.

The rebuff leaves intact a Pennsylvania Supreme Court ruling that allowed three extra days for ballots to arrive in November because of the pandemic and anticipated mail delays. Republicans said the ruling usurped the power of the state legislature in violation of the U.S. Constitution.

Republicans filed the appeals in October, seeking to help Donald Trump’s re-election bid. The Supreme Court declined to intervene before the Nov. 3 election, eventually won by Democrat Joe Biden, but three conservative justices indicated at the time they thought the state court had overstepped.

The power of state judges to reshape voting rules has been a recurring theme in presidential-election litigation, playing a central role in the 2000 Bush v. Gore case and in multiple 2020 clashes. Republicans say courts are limited by a U.S. constitutional provision that lets state legislatures set the voting rules.

Pennsylvania allowed no-excuse mail-in voting for the first time in 2020. A measure passed in 2019 by the Republican-controlled state legislature and signed by the Democratic governor said those ballots had to be received by 8:00 p.m. on Election Day, Nov. 3.

In extending the deadline to Nov. 6, the Pennsylvania Supreme Court pointed to a state constitutional clause that guarantees a “free and equal” election. The ruling also required elections officials to presume that any ballot received by Nov. 6 was mailed on time, even if it lacked a legible postmark.

State officials said fewer than 10,000 ballots were received during the three-day period after Election Day, a small fraction of the number Trump would have needed to overturn Biden’s 80,555-vote win in the state.

The Supreme Court on Oct. 28 refused to fast-track the case for a pre-election ruling. In a statement accompanying that order, Justice Samuel Alito agreed that that the issue couldn’t be resolved before the Nov. 3 election but said there was a “strong likelihood” that the Pennsylvania court ruling was unconstitutional.

“The provisions of the federal Constitution conferring on state legislatures, not state courts, the authority to make rules governing federal elections would be meaningless if a state court could override the rules adopted by the legislature simply by claiming that a state constitutional provision gave the courts the authority to make whatever rules it thought appropriate for the conduct of a fair election,” Alito wrote.

Chief Justice John Roberts has split with his fellow conservatives on the issue. Although Roberts has voted to curb the power of federal judges in election litigation, he suggested in the Wisconsin case that state courts must be given latitude to apply their own constitutions.

The court’s three liberal justices -- Stephen Breyer, Sonia Sotomayor and Elena Kagan -- have backed the power of both state and federal judges to ease voting restrictions, particularly during the pandemic.

The extension was challenged by the Pennsylvania Republican Party and two leading GOP state senators, President Pro Tempore Joseph Scarnati and Majority Leader Jake Corman. In their appeal, Scarnati and Corman argued that the state court “substituted its will for the will of the General Assembly.”

Pennsylvania Attorney General Josh Shapiro defended the extension. He wrote that the constitutional framers “in granting state legislatures the power to prescribe election rules, did not intend to hermetically seal those legislatures from all scrutiny by the co-equal branches of state government.”