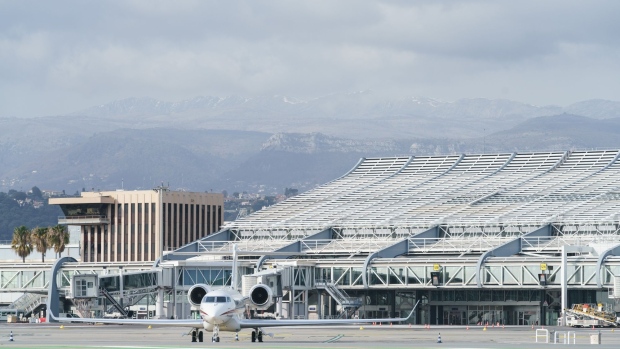 A private jet aircraft on the tarmac in front of the terminal at Nice Cote d'Azur Airport in Nice, France, on Friday, Feb. 5, 2021. In France, the government imposed tighter rules on travel in a bid to avoid a third national lockdown. Photographer: Jeremy Suyker/Bloomberg , Bloomberg

(Bloomberg) -- Surf Air Mobility Corp., a membership-based private plane operator, has agreed to merge with a blank-check company in a deal that will give the company a market value of about $1.42 billion and help propel its expansion and plans for a fleet of hybrid electric aircraft.

The transaction with Tuscan Holdings Corp. II will provide up to $467 million in gross proceeds, including committed capital from investors such as iHeartMedia and Partners For Growth along with an equity revolver from Global Emerging Markets, according to a statement provided by the company.

That includes a private investment in public equity, or PIPE, raised in advance by the company rather than the SPAC, as would be typical, said Surf Air Chief Executive Officer Sudhin Shahani.

Based at the Hawthorne airport near Los Angeles, Surf Air offers scheduled flights on turboprop aircraft among cities throughout the U.S., according to its website.

“The time is right for our mission and what we’re doing,” Shahani said in an interview, adding that travelers have come to prefer small airports during the coronavirus pandemic. “We’ve grown 50% last year to this year.”

Almost two years ago, Surf Air secured the funding commitment from Global Emerging Markets Group that it could tap when it went public. The deal with GEM was unusual because SPACs -- and not their targets -- typically take the lead role in raising any additional funds.

Surf Air had been planning to go public through a SPAC or a direct listing since at least August 2020. Shahani said then that a traditional initial public offering was also on the table.

Tuscan Holdings raised $172.5 million in an IPO in July 2019. Its initial focus was finding a merger target in the cannabis industry, according to a statement at the time.