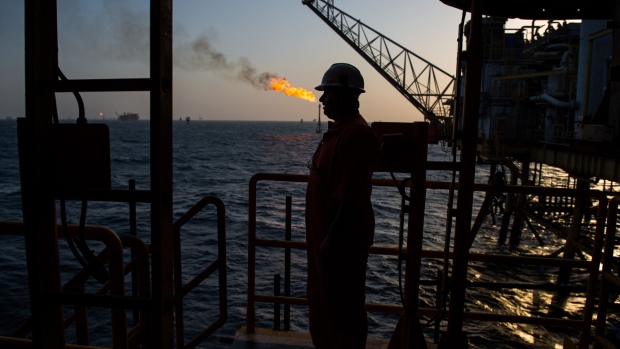 Gas flares burn from pipes aboard an offshore oil platform in the Persian Gulf's Salman Oil Field, operated by the National Iranian Offshore Oil Co., near Lavan island, Iran, on Thursday, Jan. 5. 2017. Nov. 5 is the day when sweeping U.S. sanctions on Iran’s energy and banking sectors go back into effect after Trump’s decision in May to walk away from the six-nation deal with Iran that suspended them. , Bloomberg

Qatar’s Al-Shaheen crude for January traded at the strongest premium since at least late-2014, while Abu Dhabi’s Murban was purchased at 50 cents a barrel over the grade’s official price. Buying interest has been lifted due to a ramp-up of operations at units owned by companies such as Hengli Petrochemical Co. and Zhejiang Petrochemical Co.

While demand has been supported by active purchases for the new refineries, the rally could be short-lived as oil-processing margins plummet across the world. Asian refiners have been considering rate cuts since a surge in freight rates boosted the cost of crude and eroded returns.

Those concerns have eased as shipping costs retreated, but increased competition for cargoes and poor profits from producing fuel are once again threatening to spoil the buying frenzy. In Asia’s oil hub of Singapore, refining margins slipped to its lowest level for this time of the year in over a decade.

This week, Phillips 66 sold Al-Shaheen crude at a premium of $4 to $4.30 a barrel to the region’s Dubai benchmark price. China National Chemical Corp. bought Murban this week, following purchases by independent refiners in the country earlier this month.

About 121 million tons of annual oil-processing capacity is set to come onstream in China through 2023, according to industry researcher SCI99.

--With assistance from Serene Cheong.