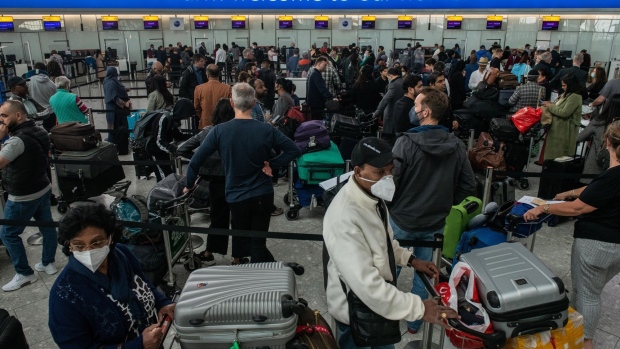 Passengers queue to check in at British Airways desks inside the departures hall of Terminal 5 at London Heathrow Airport in London, U.K., on Wednesday, April 13, 2022. Travel disruption continued to hit U.K. holidaymakers as officials warned of expected queues at airports later in the week and motorists faced fuel shortages. , Bloomberg

(Bloomberg) -- Britain’s airports, airlines and ports face their most frenetic weekend for years as a surge of vacation-bound passengers puts further stress on travel hubs already hobbled by a staffing shortfall and other issues.

London’s Gatwick airport said Friday was set to be its busiest day since the start of the coronavirus pandemic, surpassing April’s Easter rush, with more than 800 scheduled flights set to transport 120,000 passengers.

The great get-away will continue in coming days as school holidays and a four-day weekend for Queen Elizabeth’s platinum jubilee celebrations combine to trigger an exodus of Brits to sunnier climes. Numbers will be swollen this weekend by an estimated 70,000 fans of Liverpool football club heading to the Champions League final in Paris.

While Gatwick said it had “no significant queues,” passengers earlier took to social media complaining of long delays for security, boarding and even water fountains. Traffic lined up on roads near the Port of Dover as P&O Ferries continued to run a reduced service, and discount airline EasyJet Plc canceled further flights after scrapping more than 200 Thursday amid an IT outage.

Travel firms have urged people to arrive in good time for their departures after the Easter holiday saw chaos at hubs including Manchester airport, with facilities unable to cope amid worker and equipment shortages.

Staff shortages have been the chief trigger for disruption, with companies that dismissed workers or lost them to other sectors at the height of the pandemic struggling to make up the gap as bookings rebound with the easing of travel curbs. The situation has been compounded by issues such as the EasyJet IT glitch, with British Airways suffering a similar incident in March.

P&O also had its ships confined to port for safety checks after firing experienced seafarers and replacing them with lower paid ones, though the fleet is almost back to strength after several vessels cleared inspections.

“The industry is grappling with shortages across functions including security, cabin crew and baggage handling, and the coming week promises to be the next big test,” said Rob Morris, global head of consulting at Ascend by Cirium. “There’s a risk that if things go awry it could put people off traveling.”

While Britons are currently still in “a euphoric phase” as borders reopen, significant upheaval now could hurt demand later in the year when increased household costs are likely to be weighing on travel budgets, he said.

London Heathrow airport reported that operations were running smoothly while suggesting customer numbers may build toward Thursday, when the jubilee holiday begins. Europe’s busiest hub prior to the Covid crisis, Heathrow has been operating at reduced capacity with the long-haul flights in which it specializes taking longer to return.

British Airways said flights were operating normally on Friday. The unit of IAG SA has pared back its timetable by 10% through October following disruption earlier in the year as it struggled to hire sufficient workers in ground-services roles. EasyJet has cut capacity on its smallest planes for a limited period to allow operations with fewer crew while it seeks to recruit staff.

Eurostar International Ltd. said it expects a busy period for the jubilee celebrations, though is sticking to only 80% of 2019 capacity in order to ensure the resilience of its cross-Channel express-train service.