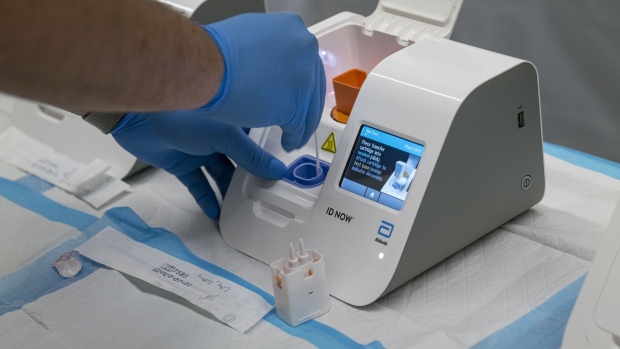 (Bloomberg Law) -- Missouri, Kentucky, Utah, and South Dakota will be the next states to get “surge” virus testing sites as Covid-19 cases in the U.S. rise and federal officials push for “smart testing” strategies.

Last week officials set up federal testing sites in North Carolina and Wisconsin and are ready to deploy eight more sites once they get states’ approvals, Brett Giroir, an assistant health secretary leading the administration’s testing efforts, told reporters Monday. He didn’t provide details as to where those sites would be.

Although “surge testing” in virus hot spots isn’t new, this is the biggest deployed to different states at once. It highlights a change in the administration’s Covid-19 testing strategy, with more emphasis on the danger that asymptomatic people can create in communities and more willingness to use resources to test those people. On Monday, Giroir encouraged states to use rapid antigen tests to test those may not yet show symptoms. Over the last month the Health and Human Services Department has distributed millions of rapid antigen tests made by Abbott. The agency bought 150 million of them in August.

“We have to keep on with our testing ecosystem,” Giroir said, “particularly testing potentially asymptomatic infected individuals. There is no reason to believe that the viral load is any less” with asymptomatic people, he said.

Both the HHS and the Centers for Disease Control and Prevention faced blowback this summer after downplaying the need to test people without symptoms. Over the last couple of months both Giroir and CDC Director Robert Redfield clarified CDC guidance that said people who have been in contact with a Covid-19 positive person but don’t yet show symptoms don’t necessarily need to be tested.

Giroir also said the U.S. is doing “pretty well” protecting vulnerable populations, like the elderly, with the latest surge.

But the top way to protect at-risk people is by minimizing community spread, as vulnerable people live out in the community and nursing homes can’t be fully protected, according to Giroir. That also requires performing more tests, including to screen young adults “who can unknowingly start a chain of community spread,” he said.

Giroir’s comments are at odds with those who advocate an untested strategy of herd immunity, or ending restrictions to build up protection to the virus among healthy people and thereby stop its spread.

Leading public-health experts have said there’s no way to ensure those at risk of severe outcomes can be fully protected in that scenario. They also say it is ethically problematic and will result in many more illnesses and deaths. Still, the idea has gained traction among the right and surfaced in places as high as the White House.

To contact the reporter on this story: Jacquie Lee in Washington at jlee1@bloomberglaw.com; Emma Court in in New York at ecourt1@bloomberg.net

To contact the editors responsible for this story: Fawn Johnson at fjohnson@bloombergindustry.com; Andrew Childers at achilders@bloomberglaw.com