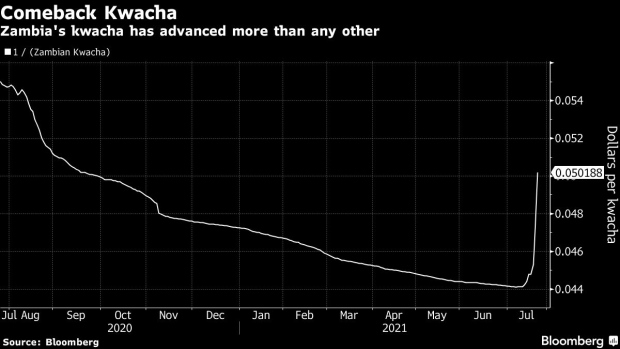 The currency gained 5.1% against the dollar at 6.41 p.m. in Lusaka. It has advanced 13.6% this month, making it the world’s best performing currency in the period tracked by Bloomberg.

Zambia depends on copper for more than 70% of its foreign-exchange earnings, and sustained high prices of the commodity is helping boost dollar supply. Investors have also been lured by local currency bond yields of nearly 33%, with the expectation that the government will finalize a long-awaited deal with the International Monetary Fund after elections next month.

“We have seen now a number of offshore investors coming back into the market,” former Finance Minister Bwalya Ng’andu said at an election rally on Sunday. They are “playing a very active role in supporting the inflow of foreign currency.”

Copper’s record prices have been more than enough to offset a 3.6% drop in the southern African nation’s production in the six months through June compared to the same period a year earlier. Copper climbed as much 3.2%, the most since May 27 on Monday.