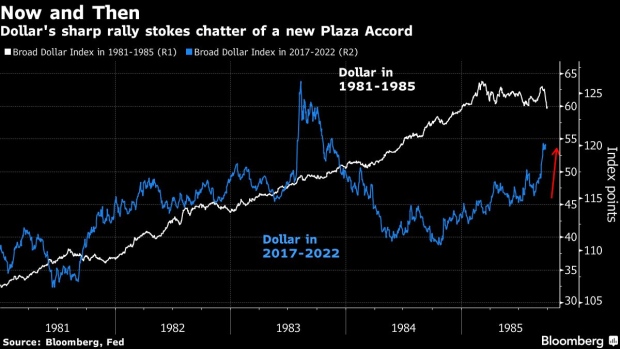 (Bloomberg) -- The dollar’s skyrocketing rise has some contemplating a rare, if not unthinkable, action: major nations agreeing to manipulate the US currency until it falls.

It has happened before -- most notably with 1985’s Plaza Accord -- which took place against a backdrop of soaring inflation, an aggressive Federal Reserve rate-hike campaign and surging dollar. In other words, a scene that looks a lot like today -- a parallel that won’t be lost on Group-of-Seven finance ministers and central bank governors as they meet this week.

Demand for the greenback has been relentless this year, the result of interest rates rising quicker in the US than other developed economies and the war in Ukraine prodding a stampede to the ultimate haven. The dollar’s 6% surge in five months has clobbered the yen to a two-decade low and put the euro almost back to 1-to-1 parity with the US currency for the first time since 2002.

For Stephen Miller, a four-decade market veteran and former head of fixed income at BlackRock Inc. in Sydney, the situation now is reminiscent of his time as a young buck in Australia’s Treasury Department, where he had a front-row seat watching the Plaza Accord unfold.

Through that agreement, France, Japan, the UK, US and West Germany agreed to weaken the dollar -- a stance taken out of a belief that the dollar’s huge move higher was damaging the global economy.

“One of the options down the track could be some sort of coordinated intervention,” said Miller, now an investment consultant at GSFM, a unit of Canada’s CI Financial Corp. which oversees about $289 billion in assets. “Markets recognize that central banks are in a bind when they’ve only got the interest-rate lever to push, so there’s already market chatter contemplating these sorts of scenarios including a Plaza Accord-style move.”

Of course, no one is predicting imminent intervention at this stage. US support would be crucial to any effective agreement and that’s not likely in the near term, given dollar strength is making imports cheaper -- an attractive quality during an era of high inflation.

Still, finance experts do see looming pain points for countries outside the US that could amplify the drumbeat for coordinated intervention.

If the euro sinks below 0.90 -- down from about 1.05 currently -- against the dollar, that could “start raising alarms,” according to Alan Ruskin, chief international strategist at Deutsche Bank AG. GAMA Asset Management’s Rajeev De Mello sees a yen collapse to 150 -- a level last seen in the 1990s --  as the potential trigger. A disorderly rise in the dollar might be a game-changer, said Goldman Sachs Group Inc. strategist Zach Pandl.

There are certainly parallels to the US currency’s strength back in 1985 and now: the Federal Reserve’s trade weighted dollar index has risen at an annualized clip of 14% so far this year, quicker than the 12% pace seen in the five years leading up to the accord.

US inflation is at the hottest level since the 1980s, when Fed Chair Paul Volcker raised rates as high as 20%, and current head Jerome Powell has vowed to do what it takes to curb rapid price growth.

“Certainly it’s something to consider especially if we see a crash in other currencies,” said De Mello, global macro portfolio manager at GAMA in Geneva. A “huge” divergence in monetary policy could induce such a decline, spurring the Japanese to “say ‘our yen has fallen too much’ and other countries would also be worried about the dollar.”

But a bona fide Plaza Accord II hangs on American involvement. The 1985 deal was inked only after the second Reagan administration viewed foreign exchange intervention in a more favorable light, underscoring the difficulty of co-ordinating any major agreement without American support.

China’s rise in global markets is another factor. Beijing will likely need to agree to any coordinated central bank action, but the yuan is not trading at levels that would require such intervention right now, according to GAMA.

“I have difficulty seeing the likelihood of concerted intervention at the moment,” said Jane Foley, head of foreign-exchange strategy at Rabobank in London. “Why would the Fed tighten financial conditions on one hand and then loosen them with the other by intervening against the dollar?”

“The stronger dollar tightens monetary conditions and this will be helping” the Fed’s policy, said Graham. “The hurdle for coordinated action is still very high.”

This reticence could however change if the US economy contracts and a persistently strong greenback hobbles everything from employment to trade. The probability of a recession within the next year is at 30%, the highest since 2020, according to a survey of economists by Bloomberg.

While most major currencies are far from crisis levels that would necessitate another Plaza Accord, it cannot be completely ruled out, said Jack McIntyre of Philadelphia-based Brandywine Global Investment Management.

“Could it happen? Yes, perhaps, especially if the US enters a recession and a stronger dollar hurts the labor market,” he said. “It’s not imminent. I see the dollar weakening at some stage -- but you never say never.”