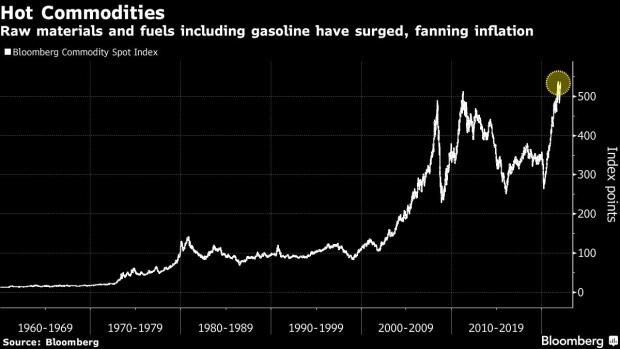 (Bloomberg) -- Surging gasoline prices are posing a tricky new problem for governments as they seek to nurse virus-hit economies back to health.

In Asia, South Korea has taken steps to ensure a steady supply of the key fuel while tracking prices, and Japan may soon hand aid to local refiners. India, the region’s second-biggest oil consumer, has had an unofficial freeze on prices for almost two months ahead of elections in several key provinces.

“Higher gasoline prices are the most straightforward way for the average guy on the street to feel the effects of inflation,” said Howie Lee, an economist at Oversea-Chinese Banking Corp. in Singapore. “It is also the fastest way to create a spiral of rising inflation pressures. That is why politicians tend to sit up and take notice when gasoline prices rise too aggressively.”

Gasoline prices are strong from the U.S. to Asia as increased mobility lifts consumption, with crude oil rallying to the highest level since 2014 this month. That’s adding to inflationary pressures just as other raw materials including foodstuffs also surge, squeezing the wallets of pandemic-weary consumers. In Asia, reduced fuel exports from powerhouse China have tightened supplies.

Retail inflation in India rose for a third month in December, and more pain may be on the way. The country’s consumer prices this year are expected to grow the fastest among the world’s 10 largest economies, according to a Bloomberg survey. China, South Korea and Japan made the bottom of the list.

In Japan, higher energy prices are squeezing household budgets, where inflation expectations are at the highest since 2008, in part due to costlier gasoline. The South Korean central bank is also worried about rising prices as inflation topped 3% for a third straight month in December. Meanwhile, Indonesia is coping with a surging subsidy bill amid rising fuel prices.

Right now, pricing patterns signal a firming market. Across the U.S. as well as Asia the motor fuel is in a bullish structure called backwardation, indicating traders expect a summer of relatively weak supply and strong demand. In Europe too, the forward curve is backwardated from April through December, and the structure is currently much steeper than seasonal norms.

The Biden administration in the U.S. has invested a lot of time and effort trying to tame pump prices, orchestrating an unprecedented coordinated release of strategic petroleum reserves along with Japan and South Korea. The president has also been urging OPEC and its allies to open up their taps faster. Still, that’s had only a limited, temporary impact in the face of rising demand, with average retail prices barely lower than the seven-year high hit in November.

The underlying problem is the oil market remains hot. Brent has surged 26% since the start of December to about $86 a barrel, and banks including Goldman Sachs Group Inc. have forecast it’ll hit $100 in the summer. Gasoline futures in the U.S. jumped by almost a quarter over the same period, as have Asian benchmark prices for 92-RON gasoline in Singapore.

Faced with the challenge, South Korea slashed fuel taxes in October as part of its effort to rein in inflation. Since then, local gasoline prices eased for nine weeks, before steadying and the government fears they may now rebound as global prices spike. Ahead of the upcoming Lunar New Year break, typically a period of increased travel, Seoul is asking refiners to keep prices stable.

In Japan, the average gasoline price may hit 170 yen ($1.49) a liter soon, a threshold that triggers emergency aid from the government for refiners.

In China, gasoline prices in Beijing have been inching higher, while still keeping below a three-year high reached last October, according to data compiled by Bloomberg. The emergence of omicron just weeks before the Lunar New Year and the Winter Olympics prompted authorities to lock down buildings and neigborhoods, keeping thousands of residents off the streets ahead of the holidays when locals typically return to their hometowns for celebrations.

India cut taxes on gasoline and diesel in November, leading to a one-time drop in pump prices that had been hitting records. Since then, fuel retailers have kept prices steady, despite rising costs, ahead of elections in several provinces where Prime Minister Narendra Modi’s party faces a stiff challenge.

“Asian economies have been worried about rising gasoline prices for a while, but even more so now as inflationary expectations become more entrenched,” Lee said.