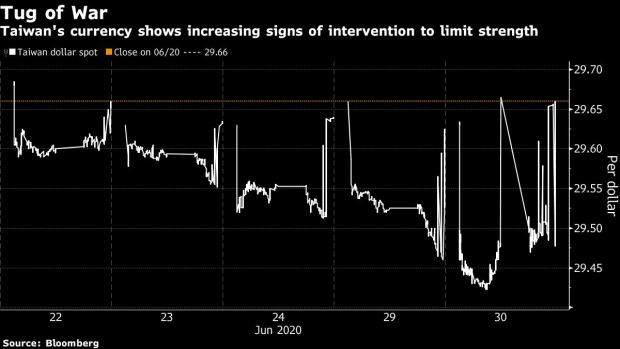 (Bloomberg) -- The intraday trading chart for Taiwan’s currency is looking more and more crazed as suspected intervention by the central bank combats pressure on the exchange rate to strengthen.

Take Tuesday. The Taiwan dollar jumped as much as 0.7% against the greenback in morning trading, before giving up all its gains at the noon-time break. Upon resuming trade it strengthened sharply again, before ending the day down 0.1%. Such “smoothing” actions, as the central bank calls them, have meant the currency is one of world’s least volatile on a closing basis in the past month, while gains are capped at 29.6 per U.S. dollar.

Late-day interventions have historically been the hallmark of central bank efforts to minimize gains in the currency and protect the island’s vital exporters. The Taiwan dollar has climbed 1.6% this year against the greenback, the best performance among 31 major exchange rates. The Taiwanese currency is trading near its highest in two years.

Cash is pouring into the island at a rate barely seen in the recent years. Inflows this month have reached $3.3 billion, the fourth-highest total in the past five years and the most in Asia, according to data compiled by Bloomberg. As well as Taiwanese firms bringing money home, the stronger economy and comparatively high interest rates have turned Taiwan into something of a haven for emerging-market investors.

Some of the funds are likely finding their way into the stock market. Taiwan’s equity benchmark climbed almost 8% in June in U.S. dollar terms, putting it in the top 10 performers worldwide.

While limiting the impact on exporters -- which comprise a substantial part of the economy -- central bank action in the currency market risks drawing unwanted attention from the U.S. Treasury. A report in January expressed concern about Taiwan’s FX policies. The report noted that Taiwan is the only major economy in Asia that doesn’t publish full details on its international reserves in accordance with the International Monetary Fund’s standards.