Surging energy prices are typically a boon for Canada. But not this time.

On Thursday, oil soared above US$100 a barrel for the first time since 2014 as Russia began a full-scale invasion of Ukraine, triggering fears of a disruption to energy exports amid already tight supplies. Yet, what would haven been unambiguously positive for Canada’s oil-rich economy in the past may turn out to be a drag now, economists warn.

Income for the oil sector will jump, as always, and that will help boost government revenue. But there’s much less scope today for the oil rally to strengthen the Canadian dollar, which is one of the key ways benefits are transmitted across the country. The war, meanwhile, coupled with the rising costs to consumers could dent confidence and spending.

“We don’t get quite the same bang for the buck or the same torque from higher energy prices that the economy would have had in the years gone by,” Douglas Porter, chief economist at the Bank of Montreal, said by telephone. 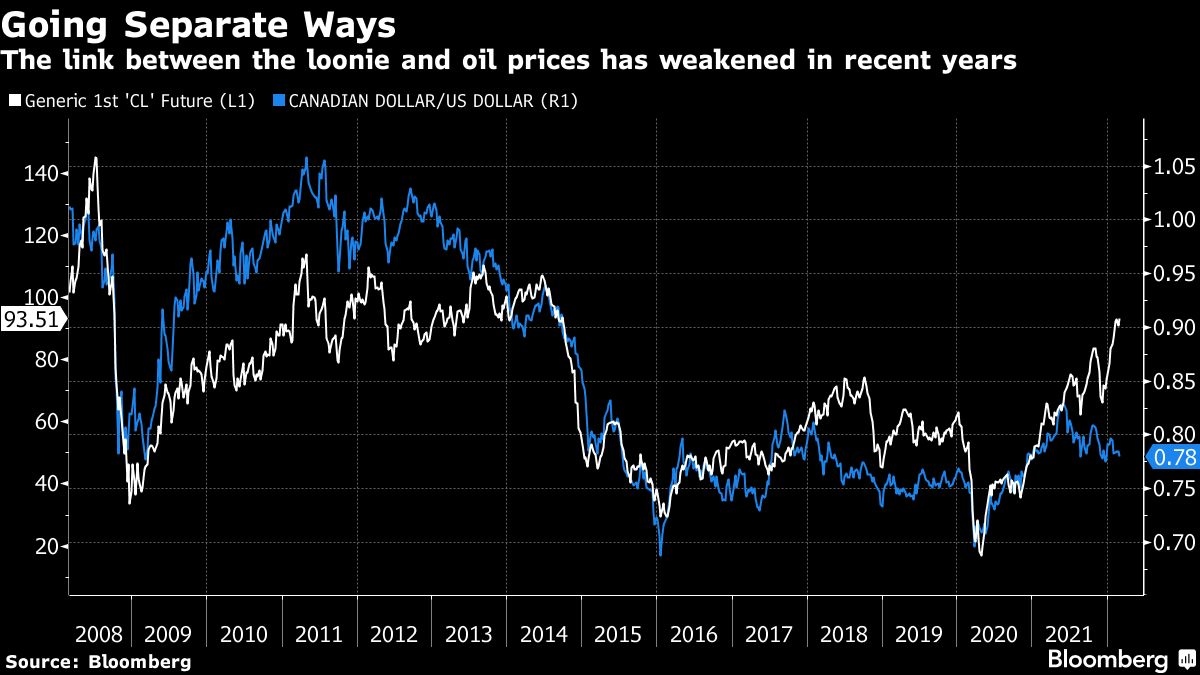 As one of the world’s biggest producers and exporters of oil, Canada’s growth can be impacted significantly by the energy sector, which accounts for about 10 per cent of its economy and 15 per cent of the benchmark stock exchange, the S&P/TSX Composite Index. That’s why an oil rally would have typically led to an appreciation of the currency in tandem with prices. But that hasn’t happened this year, with the loonie down 1.5 per cent in 2022.

“Traditionally, there was a very tight relationship between oil prices and the Canadian dollar,” Porter said. “That has weakened notably in recent years and that’s all but gone away in 2022.”

The reason for the weaker link is that capital spending isn’t expected to respond to higher energy prices due to environmental, social and governance pressure and the push for clean and renewable energy, economists said. The last time oil was trading near US$100 a barrel -- in the first half of the last decade -- Canada’s currency was near parity with the U.S. dollar, helping to shelter households from higher global price increases.

Another factor is that higher oil prices are reflecting growth-threatening geopolitical uncertainty, rather than strong global demand. That’s a lose-lose situation of higher inflation combined with a weaker economic outlook.

“If you include all of the repercussions of the conflict in Europe, it’s a negative for the Canadian economy on the growth side but still inflationary,” Avery Shenfeld, chief economist at the Canadian Imperial Bank of Commerce, said by phone.

That added pressure comes with inflation at a three-decade high and the Bank of Canada about to begin raising interest rates to curb it. Annual gains in consumer prices hit 5.1 per cent in January, the highest since 1991. Markets expect policymakers led by Governor Tiff Macklem to increase borrowing costs at their March 2 decision, with at least six more moves to follow over the next 12 months.

“For the Bank of Canada, at least at this point, this won’t alter their thinking surrounding a rate hike next week,” Royce Mendes, head of macro strategy at Desjardins Securities Inc., said by phone. While policy makers will have to acknowledge the potential damage the invasion could do the global outlook, “for the domestic economy, the central bankers are still going to be focusing on inflation and that means gradually and deliberately raising rates this year.”