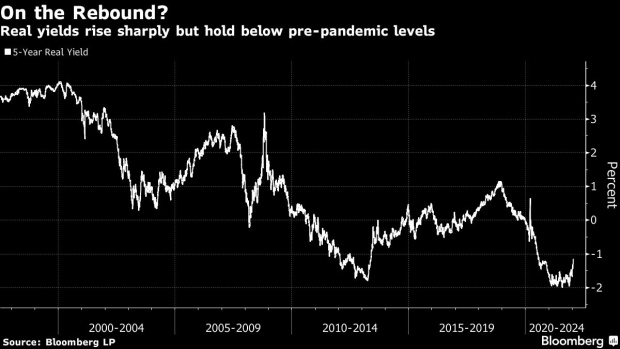 (Bloomberg) -- Inflation-adjusted Treasury yields are surging back from record lows, hammering bondholders with losses and sending tremors across financial markets preparing for an era of historically loose monetary policy to draw to a close.

This month’s jump in so-called real yields follows signals from the Federal Reserve that it’s likely to begin a cycle of interest-rate hikes in March and start whittling down its $8.8 trillion balance sheet this year by not rolling over maturing bonds, withdrawing support from the market.

That double whammy raises the specter that the bleeding for stock and bond holders has only just begun, with markets poised to be weaned off the negative real interest rates that have driven up the prices of everything from junk bonds to homes.

“Real yields are much more important than they have been in the past,” said Dan Ivascyn, chief investment officer at Pacific Investment Management Co. “Asset valuations are elevated across the board and that has been due to a low real yield regime.”

Real 10-year Treasury yields have jumped by more than 50 basis points since late December to about -0.59% Wednesday, roughly half the low seen in early November. Five-year yields have risen nearly as much to about -1.15%.

The persistence of subzero real yields reflects the still immensely expansive monetary policy of the central bank, and some see it as a sign of pessimism about the economic outlook.

But the jump has already unsettled markets that rallied strongly after the pandemic on the back of low real rates. The S&P 500 is down more than 5% from its record peak at the start of the year while the Nasdaq Composite Index -- which includes growth stocks particularly sensitive to rising rates -- has dropped nearly 11% from its November high. A broad index of Treasuries has lost 2.3% in January and corporate junk bonds are down some 1.2%, putting them on pace for the worst month since markets seized up in March 2020.

Whether the Fed’s looming shift will usher in a sustained period of higher real yields is still uncertain and will depend on how aggressively it needs to act to rein in decades-high inflation. Even after this month’s rise, such yields are still considerably far from the near zero seen in early 2020.

“In order for the Fed to tighten financial conditions, real yields need to rise,” from “extremely accommodative levels,” said Bob Miller, head of U.S. multi-sector fixed income at BlackRock Inc. He said the pace of the rise over the near term rests with how the Fed intends to reduce its balance sheet, which may not be clear for some time.

Goldman Sachs Group Inc.’s financial conditions index -- a measure that incorporates variables like stock prices, credit spreads, interest rates, and the exchange rate -- has barely risen above a record low reached in November despite money-market traders pricing in about four quarter-point rate hikes from the Fed in 2022.

That suggests the bond market has a long way to go before any tightening of financial conditions fully registers with the economy, let alone alleviates concern that inflation could become stubbornly entrenched.

“An extreme level of uncertainty” regarding inflation, the economy, Covid and Fed policy looms for investors and markets over “the next couple of quarters,” said Pimco’s Ivascyn. He sees room for real yields to rise another 25 to 50 basis points this year, which would increasingly weigh on both corporate bonds and equities.

The broader concern is whether a steeper rise in real interest rates will trigger a deeper decline in financial asset prices than seen so far, which could cast a lengthy shadow over consumer and business confidence.

“If real yields get to zero then that starts to be a concern for equities,” said Subadra Rajappa, head of U.S. rates strategy at Societe Generale. “We have not seen that concern yet, but the rate at which we are going with real yields it could become a problem.”

There are indications that some investors are bracing for that by buying 30-year Treasuries, a haven asset that tends to rise at times when growth and inflation are expected to slow. Nominal 30-year yields have risen less than those on some shorter-dated securities during the recent selloff, reducing the gap with 5-year yields to about 53 basis points from more than 70 basis points in early January.

The direction ahead, however, will hinge heavily on whether inflation peaks in the current quarter, as many analysts expect. If it does, that could allow the Fed to slow the pace of its future policy tightening.

“We could see a more consistent rise in real yields,” however it would reflect “a much higher terminal fed funds rate,” said Rajappa, referring to where the market foresees the peak of the upcoming tightening cycle. “But I think it’s too premature now for the market to price that in.”