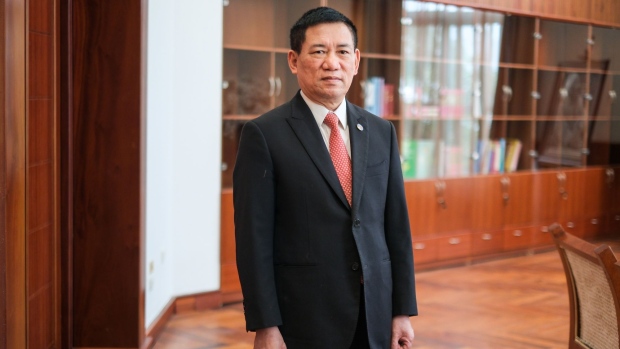 (Bloomberg) -- Vietnam plans to reduce the issuance of government bonds as it sees the budget sufficiently funded thanks to revenue buoyancy, Finance Minister Ho Duc Phoc said, in a move that will allow the Southeast Asian nation to stick to fiscal deficit targets.

“We will adjust our government bond sale plan to be in line with the disbursement progress of public investment,” Phoc told Bloomberg News in an interview in Hanoi on Tuesday. Tax collection “is on track” as economic growth picks up, while state spending on infrastructure projects is “still slow,” he said.

The finance ministry has so far issued around 125 trillion dong ($5.03 billion) of government bonds this year, or just about 31% of the planned sales, official data showed.

Vietnam had planned to sell 400 trillion dong of government bonds this year. Any reduction will help the government steer the deficit closer to the originally targeted 4% of gross domestic product -- a goal that seemed unattainable after the government announced a $15 billion stimulus package to support the economy.

Phoc said the government aims to keep this year’s budget deficit at 4% of GDP as requested by parliament. He noted that the deficit would increase to 4.5% of GDP this year “if we include the stimulus package,” he added.

In addition to the plan to lower borrowings, Phoc sees state revenue surging 22% from last year, even after tax concessions and land rent exemption to businesses.

The expected revenue buoyancy is tied to an economy that the government forecasts to expand by 8% this year. The outlook, however, is not without risks.

Vietnam’s economy will “be severely affected” by the ongoing global headwinds, Phoc said, citing the increases of the dollar and prices of raw materials that add to production costs. Meanwhile, “demand is falling in international markets and will hurt our exports next year,” he added.

“We are working on scenarios with alternative measures to cope with the worst possibility,” Phoc said, adding that the ministry is taking steps to restrain prices from rising as it sees stronger inflationary pressure ahead of the upcoming holiday seasons into the first quarter of next year.

The measures include increasing stockpiles of essential commodities and stepping up coordination with local governments to ensure adequate supplies to avoid shortage of goods, hoarding or speculating of essential items. Phoc is confident the government will be able to keep inflation under 4% this year.