Initial jobless claims in regular state programs totaled 419,000 in the week ended July 17, up 51,000 from the prior week, Labor Department data showed Thursday. The median estimate in a Bloomberg survey of economists called for 350,000 new applications. 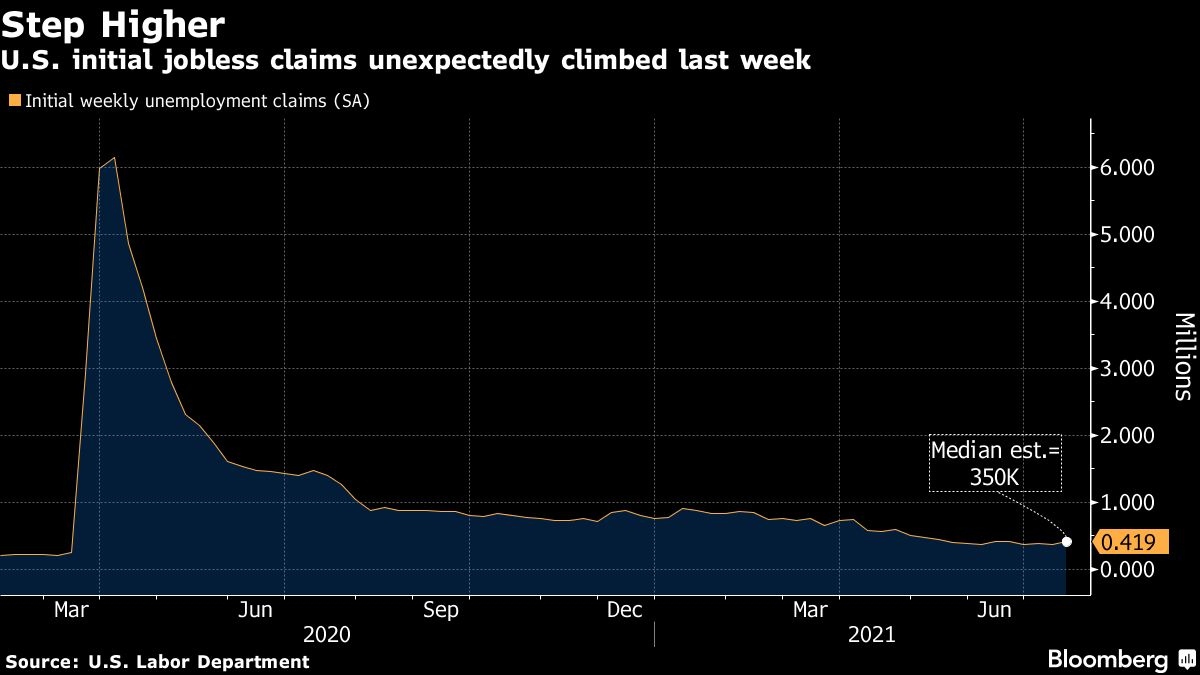 Continuing claims for state benefits fell to 3.24 million in the week ended July 10.

The unexpected jump in initial jobless claims reflected outsize increases in four states -- Michigan, Texas, Kentucky and Missouri. While a number of factors make seasonal adjustment of the weekly data difficult, the rapidly spreading delta variant of COVID-19 could inject further volatility into the figures in the coming months.

“The claims numbers continue to suffer from seasonal adjustment difficulties caused by shifts in the timing and extent of the automakers’ annual retooling shutdowns from year to year,” Ian Shepherdson, chief economist at Pantheon Macroeconomics, wrote in a note.

The initial claims figures coincide with the survey period for the Labor Department’s monthly jobs report. A majority of states reported declines on an unadjusted basis from the prior week, including New York, Oklahoma and Tennessee.

Nearly half of U.S. governors have ended all three of the federal unemployment benefit programs created during the pandemic before their expiry in September, arguing the supplemental aid is holding back job growth and preventing businesses from filling a record number of job openings.

Continued claims across all programs fell by 1.26 million in the week ended July 3, mostly reflecting the end of Pandemic Unemployment Assistance and Pandemic Emergency Unemployment Compensation in certain states.

Lawsuits in some of those states challenging the governors’ legal authority to end the aid could restore the halted benefits or keep them in place until they officially expire in September.