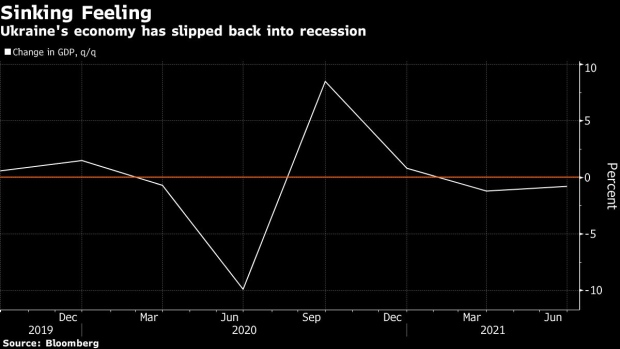 A breakdown of Ukrainian output data for the second quarter confirmed what many had belatedly concluded: Covid-19 lockdowns hit the economy harder than originally assumed.

With the slip back into recession wrong-footing analysts when it was reported last month, detailed figures published Monday revealed consumer spending and investment both shrank, with transportation and hospitality suffering especially.

“It takes longer for weak economies to recover,” said Yevhenia Akhtyrko, an analyst at Concorde Capital in Kyiv. “We’re still below 2019.”

The outlook is mixed. While minutes from the central bank’s last policy meeting signaled no more interest-rates hikes are planned, the government is facing a barrage of new coronavirus infections and hospitalizations alongside one of Europe’s slowest vaccination campaigns.

A record grain harvest is likely to be the only driver of economic expansion, according to Akhtyrko.