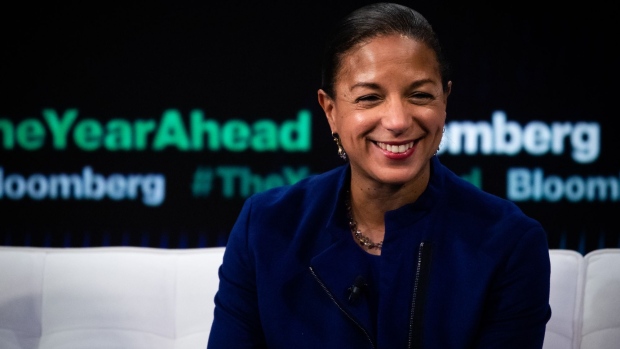 Susan Rice, former U.S. national security advisor, smiles during the Bloomberg Year Ahead Summit in New York, U.S., on Thursday, Nov. 7, 2019. The summit addresses the most important trends, issues and challenges every executive will need to consider in 2020 and beyond. , Bloomberg

Former national security adviser Susan Rice, a Netflix director, sold some of her shares of the video streaming company worth US$305,323 this week as speculation swirls that she is among the candidates to be Democratic presidential nominee Joe Biden’s running mate.

A spokeswoman for Rice said the sale was unrelated to politics and was made under a stock trading plan she filed more than three months ago under Securities and Exchange Commission rules.

“Ambassador Rice’s sale of a fraction of her Netflix stock has nothing to do with VP speculation,” Erin Pelton said.

Rice, who also served as the U.S. ambassador to the United Nations, is being vetted as a possible running mate for Biden. He’s expected to announce his choice next week.

The options were exercised Wednesday and disclosed in an SEC filing Thursday night. Netflix stock has nearly doubled in the past year. Rice, who was named to the company’s board in 2018, exercised her options at US$508.68. As a Netflix board member since 2018, Rice receives 125 stock options a month as part of her compensation package.

Rice’s net worth was somewhere between US$14.7 million and US$28.5 million, according to a 2016 financial disclosure statement she made as President Barack Obama’s national security adviser. Those assets do not include her two homes, and her husband Ian Cameron’s inherited wealth could make their family’s assets significantly larger.