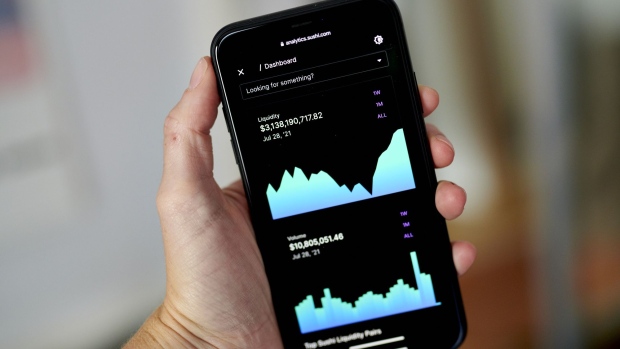 The Sushiswap website Analytics page on a smartphone arranged in the Brooklyn Borough of New York, U.S., on Thursday, July 29, 2021. Lending on cryptocurrency platforms rose 7.6% from last week to $29.40 billion, according to data compiled by DeFi Pulse. Photographer: Gabby Jones/Bloomberg , Bloomberg

(Bloomberg) -- SushiSwap, the decentralized cryptocurrency exchange that started with a scandal, is facing a crossroads as infighting among developers has investors seeking to reorganize the supposed autonomous organization.

Two large owners of Sushi tokens, which gives holders governance rights over how the protocol operates, submitted a proposal to restructure the project that may be considered for adoption as early as this week. The plan suggests establishing a more formalized entity to manage the effort, and checks and balances to ensure the proper spending of funds.

SushiSwap was supposed to be “a community-built open-source ecosystem,” in which users could trade directly with each other, without intermediaries, and make operational decisions. But it turned out to be largely controlled by a handful of mostly anonymous developers, who sometimes bypassed community votes and have been seeking to increase their compensation. The discord has led to the trading of accusations of extravagant spending and self-enrichment without community approval or oversight.

“It is physically impossible for every decision a DAO makes to go to a public vote,” Jeff Dorman, chief investment officer at crypto investment firm Arca, which is one of the sponsors of the restructuring proposal, said in an interview. “We are using Sushi as a microcosm for what all DAOs should look like in the future.”

SushiSwap’s start was a microcosm of why U.S. Securities and Exchange Commission Chair Gary Gensler has called the sector the Wild West of crypto. In August 2020, an anonymous entity going by Chef Nomi simply copied the computer code of a rival exchange called Uniswap and launched SushiSwap. Offering its own token, Sushi, the exchange quickly lured hundreds of millions in user funds with incentives. But within weeks Chef Nomi cashed out about $13 million of developer funds. Following an uproar, Chef Nomi returned the funds and handed all credentials to Sam Bankman-Fried, who runs the FTX crypto exchange, and his team, who took over SushiSwap and saved it from collapse. Bankman-Fried has not been involved in Sushi recently, he said in an email.

On Dec. 5, SushiSwap Chief Technology Officer Joseph Delong made a series of tweets to refute the “absurd defamation” about him, while also saying he would quit if his compensation is not increased.

The recent turmoil at SushiSwap may be partly the result of the slump in the price of most DeFi tokens. While Sushi’s price has doubled since January, it’s down about 70% from an all-time high in March, according to data tracker CoinMarketCap.com.

Sushi’s core developers a didn’t respond to multiple requests for comment from Bloomberg. Delong didn’t return a request for comment.