Sustainability and profitability in the land of the Inca - BNN Bloomberg
{{ currentBoardShortName }}
Markets
As of: {{timeStamp.date}}
{{timeStamp.time}} 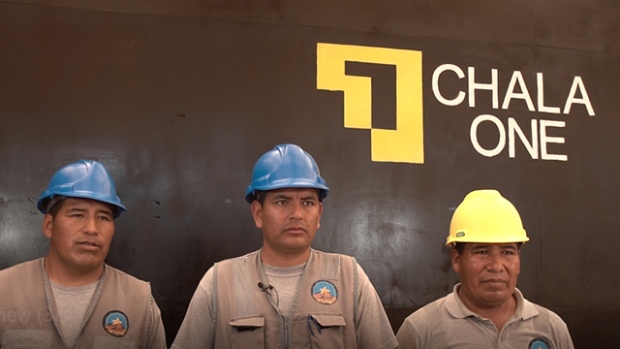 Miners at the Chala One plant in Peru. , Image courtesy of Market One Media Group

CHALA, Peru — It was another arduous journey for Luis Cama that brought him from Cuzco, the ancient imperial city of the Incas, to Chala, a sleepy fishing village in southern Peru. But the 24-hour road trip that winds through the central Peruvian Andes, one that Cama endures several times a month, is well worth the drive for the miner.

Like before, Cama and his compadres have brought a truckload of valuable gold-bearing ore to Chala One, a mineral processing facility owned and operated by the Vancouver-based Inca One Gold Corp. (TSX.V: IO).

The trip back up the mountains for Cama and his friends will be much more enjoyable, as the group will be laden with a profitable cheque and the comfort of knowing that they are part of a sustainable mining operation, in the formalization process which is helping turn the illegal mining tide in Peru.

“They give us 100 per cent support in every aspect … that’s what we appreciate about Chala One,” said Cama, who has been mining since he was a child.

“We register the bill and the next day they are making the payment; they are always in favour of us, the miners.”

Above everything else, Cama, like dozens of other miners in southern Peru, is being attracted to the Canadian company’s dedication to supporting Peru’s formalization process and sustainable mining in the Incan heartlands — the front line in Latin America’s battle against illegal mining. As gold prices keep soaring, illegal mining has blossomed in Peru, one of the world’s major gold producers.

According to Peruvian officials, unregistered and informal mining increased by 540 per cent between 2006 and 2015, while production from legal mining, which brings in tax revenue, fell by 28.5 per cent.

But most worrying is the destruction of the environment by illegal miners, which threatens the local ecology, home to thousands of species of plants and animals, some yet to be identified.

“For us, supporting the formalization process, which leads to sustainability and profitability, goes hand in hand,” said Edward Kelly, president and CEO of Inca One Gold Corp. in Vancouver

The company’s main asset, the Chala One mineral processing plant, deals only with licensed miners, something the Peruvian government believes will help push the modernization of the mining sector in the country.

The drive to fight illegal mining in Peru now involves having all miners process their material at a recognized and government permitted milling facility, like the Chala One gold processing plant.

“Prior to us purchasing ore, miners must first become an approved Chala One customer/vendor by submitting all necessary and government-required permits and tax IDs,” said Kelly, whose goal is to set the standard in Peru when it comes to a sustainable, transparent and fair mineral-buying experience.

Formalization in Peru is all about sustainability in mining, and is already paying off for Inca One. Gold production during last December grew substantially as Chala One produced 1,330 ounces of gold, compared to the prior nine-month average of 417 ounces per month, an increase of 219 per cent.

Mineral supply also peaked with daily deliveries to Chala One through December climbing to the year’s highest level as the company sourced and paid for 2,805 tonnes of gold-bearing material from government approved, permitted miners.

“The company’s ramp-up plan is now successfully complete, and our Chala One plant finished December on a strong note,” said Kelly.

“We will turn our focus to achieving healthy positive cash flow from this point forward, with diversified shareholders, as we become a main player in the Peruvian gold-processing space.”

Inca One’s financial performance, underlined by its commitment toward formalization and sustainable mining, has industry analysts like Belgian-based Thibaut Lepouttre predicting a strong year for the company in 2017.

“2017 will be a very important year for Inca One, wherein it reaches its nameplate capacity and generates a positive free cash flow,” said Lepouttre on CaesarsReport.com, an online mining portal specialized in junior mining companies.

“For this year, all eyes will be on Inca One reaching and keeping the throughput rate of at least 100 tonnes per day, which should result in Inca One to be free cash-flow positive.

“Once this has been established, Inca One can start to look forward to the future and consider further expansion options, either by expanding the throughput at the current Chala One mill or by looking for potential new mill sites,” said Lepouttre.

He said Inca One’s practice of dealing with only registered miners is also in line with the Peruvian government’s efforts to eradicate the nation’s ‘black’ gold market.

“This will obviously help the environment as well, as environmental inspections will be much more efficient once the inspectors know exactly where mining is happening and at what rates. And [all] mines without any license will obviously be shut down,” continued Lepouttre.

Luis Belisario Hito is in charge of mineral marketing at Peru’s Estrella de Chaparra mine, a co-operative of 458 miners, who previously operated independently and “informally” without proper permits.

“Before, it was like working blind, with no experts and no professionals to help us,” said Hito, whose ore is also delivered to the Chala One plant, which is about a 90-minute drive away from his mine.

“We’ve been working two years with Inca One … they are better than any other plants. And the payments are faster.”

“I will recommend other miners that are formalizing their operations to work with Inca One,” added Hito, validating Inca One’s vision of profitability through sustainability to become Peru’s mineral processor of choice.