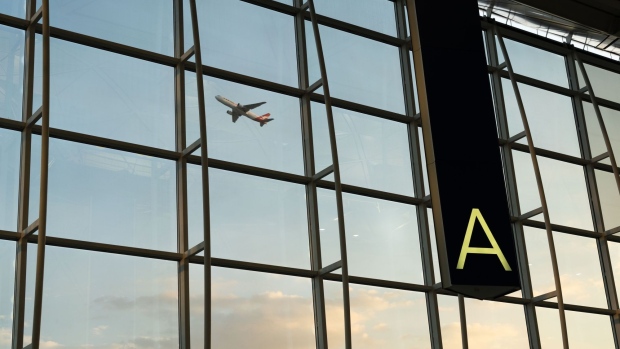 A passenger aircraft takes off from the Hong Kong International Airport in Hong Kong, China, on Monday, March 7, 2022. A total of 5,082 people departed Hong Kong on Sunday, the most since the city was hit with its most severe and far-reaching wave of Covid. That took last week's tally to a net 22,965 departures from all ports. Photographer: Bertha Wang/Bloomberg , Bloomberg

(Bloomberg) -- Having established the airline industry should swing back to profit next year thanks to pent-up travel demand, the focus will now necessarily shift toward ensuring a greener future.

Sustainable aviation fuel and carbon offsetting are set to be among the main themes for the final day of the International Air Transport Association’s 78th annual general meeting in Doha, as airlines look beyond the damage of Covid-19.

On the slate for Tuesday are sessions that cover the sector’s consumption of single-use plastics and how to increase production of cleaner fuel.

Also in focus -- carriers’ and airports’ divergent views on slot allocation and the progress being made toward the safer carriage of lithium batteries. Airline chief financial officers will also talk about how they’re trying to repair balance sheets amid mounting economic uncertainties.

Tourists are staying away, concerned the economic collapse will trigger further unrest, as higher oil price swells costs, he said in an interview at IATA’s annual meeting in Doha.

“The airline has not received any assistance from the government for the last year, so we managed by ourselves, but it’s becoming tougher and tougher,” Pathirage said.

Speaking in an interview Monday with Bloomberg Television, Kirby added that a top priority for his airline is to secure additional slots at New York’s JFK airport, specifically to focus on business travel to the West Coast.

Gulf carrier Emirates said it’s in talks to take delivery of A350 wide-body jets ordered from Airbus SE over a shorter period amid continuing uncertainty around the handover of Boeing Co.’s delayed 777X model.

With the American plane now not due to commence deliveries until 2025, Dubai-based Emirates is looking to accelerate A350 arrivals once the first example from a 50-strong order is shipped, most likely in late summer 2024, Tim Clark, the airline’s president, said Monday in Doha.

Ryanair Holdings Plc’s British-based pilots accepted a new pay deal with the airline, avoiding any potential strike and giving the carrier some relief amid a wave of action from staff across Europe.

Ryanair members of the British Airline Pilots’ Association voted to accept a revised pay offer from the airline, a union spokesperson said Monday by email.

BALPA had been in talks with Ryanair to restore pay after accepting so-called mitigation measures during the pandemic. Still, Ryanair faces a wave of strikes across Europe on June 25. Pilots and cabin crew in Italy, Spain, Portugal, France and Belgium are all seeking improved pay and conditions.

Finnair OYJ is in discussions to offer aircraft and crews to other airlines through mid-2023 after leasing out about 10% of its fleet to carriers including Lufthansa and British Airways this summer, Chief Executive Officer Topi Manner said in an interview.

The carrier, which has traditionally connected Asia and Europe, has been hit hard by the closure of Russian airspace to European airlines following the Ukraine invasion. Finnair will operate 70% of its pre-pandemic capacity this summer along with the wet leased capacity, Manner said.