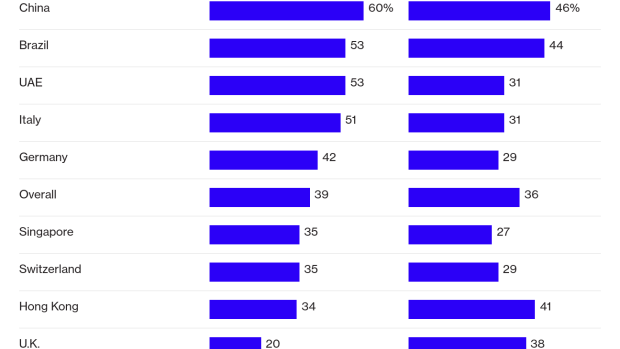 HEBEI, CHINA - NOVEMBER 19: Smoke billows from smokestacks and a coal fired generator at a steel factory on November 19, 2015 in the industrial province of Hebei, China. China's government has set 2030 as a deadline for the country to reach its peak for emissions of carbon dioxide, what scientists and environmentalists cite as the primary cause of climate change. At an upcoming conference in Paris, the governments of 196 countries will meet to set targets on reducing carbon emissions in an attempt to forge a new global agreement on climate change. (Photo by Kevin Frayer/Getty Images) , Photographer: Kevin Frayer/Getty Images AsiaPac

(Bloomberg Markets) -- Tao Zhang is bullish on sustainability in China—especially when it comes to livestock emissions. The founder of U.S.-China impact investing consortium Dao Ventures has spent much of the past year looking to accelerate investment in more environmentally friendly plant-based or lab-grown meat for Chinese consumers through a new company, Dao Foods.

Climate change activists are worried that China’s increasing appetite for meat is further straining natural resources and causing methane emissions to soar. Yet Zhang and a new crop of impact investors believe that this, and China’s many other environmental and social concerns, can be solved with capital.

“China lacks water and natural resources, so this is something that needs to happen,” says Zhang, who splits his time between Beijing and Washington, D.C. “China’s a big consumer market, so we’re always thinking about ways to make Chinese consumers part of the solution.”

Being an impact investor in China isn’t as lonely as it used to be, says Zhang, whose firm has made or facilitated more than $200 million in China-focused environmental and social investments over the past decade. They include projects to develop clean refrigeration technology and to convert agricultural waste into cooking charcoal.

Impact investing, a trend that’s growing worldwide, seeks to address societal concerns while still trying to make a market-rate return. In China, the most populated and polluting country on the planet, there’s the extra benefit that solving local challenges will make a significant dent in global efforts to lower carbon emissions or build sustainable agriculture.

The Chinese government’s ambitious environmental goals are creating some of these opportunities. It’s targeting the sale of 2 million alternative-fuel vehicles in 2020 to combat pollution. The People’s Bank of China is pushing incentives for green finance. The central bank said in June it would broaden the range of collateral it accepts in its medium-term lending operations to include debt instruments tied to the green economy.

About 60 percent of Chinese investors with at least $1 million in investable assets said they have already incorporated holdings focused on environmental, social, and governance (ESG) issues into their portfolios, the survey found. Seventy-four percent of wealthy Chinese investors—compared with just 32 percent of their U.S. and U.K. counterparts—also expect sustainable investing to be the new norm in the next decade.

Kupferschmid-Rojas offers further explanation for the findings: Chinese millionaires and billionaires are more likely to be younger, self-made, and female—traits that are common among investors hoping to get both social and financial returns, she says. More than 9 percent of the world’s ultrahigh-net-worth women are based in China and Hong Kong, according to researcher Wealth-X, representing about $400 billion in wealth.

To be sure, while there is plenty of momentum for sustainable investing in China, it’s still early days. China lacks the pension funds that propelled impact investing in other regions. Jason Lui, head of equity and derivative strategy at BNP Paribas in Hong Kong, says investors focusing on value and long-term strategies such as impact investing in China, an historically short-term-oriented market, are “just getting going.” But he adds that the country is starting to look like one of the more stable places to invest in Asia.

The regulatory and legal framework that supports ESG investing still needs to be strengthened to make Chinese ESG data more reliable and impact investing less difficult, says Luo Nan, chief China representative of the United Nations-backed Principles for Responsible Investment. There’s some expectation that will happen. The Shanghai and Shenzhen exchanges joined the Sustainable Stock Exchanges Initiative, which aims to improve ESG reporting. And in 2020 the China Securities Regulatory Commission will require listed companies to disclose ESG risks in their operations.

Meanwhile, investment firms are hurrying to meet sudden demand for impact strategies. “There is a huge uptick in interest in both Hong Kong and mainland China,” says Amit Bouri, chief executive officer of Global Impact Investing Network, a nonprofit in New York that promotes impact investing. “A number of private banks are rushing product into the market.”

Beijing-based brokerage China Galaxy Securities Co., which has in recent years been underwriting green bonds and providing other funding to environmental companies, says it’s looking to push its green strategy further. The firm plans to start an ESG rating system for listed companies and will recommend those with higher scores to investors. Charles Yu, director for institutional investor services at China Galaxy, says it’s betting that local managers in China have a better chance of avoiding ESG “land mines” such as Changsheng Bio-Technology Co.’s vaccine scandal last year. “Following ESG principles can actually generate higher returns here than in developed countries where there are fewer land mines,” he says.

China’s already the top target for clean-energy investment globally, with more than $100 billion deployed into the sector last year, according to BloombergNEF. Impact investors, who mostly focus on early-stage venture capital or loans, have potential opportunities not just in sustainable food and clean energy but also in transportation, recycling, health care, senior care, and education in China, says Bin Li, founder of U.S.-China Social Innovation Consulting in San Francisco.

Indeed, as China enters the Year of the Pig, a symbol of good fortune, there appears to be a plethora of ways to give back. “There’s an old saying in China that if you make it financially, you should help other people,” says Dao Ventures’ Zhang. “People are definitely starting to think about how to leverage their wealth to do something meaningful for society.”

Chasan is a sustainable finance editor at Bloomberg News in New York. With Zhang Dingmin

To contact the editor responsible for this story: Siobhan Wagner at swagner33@bloomberg.net