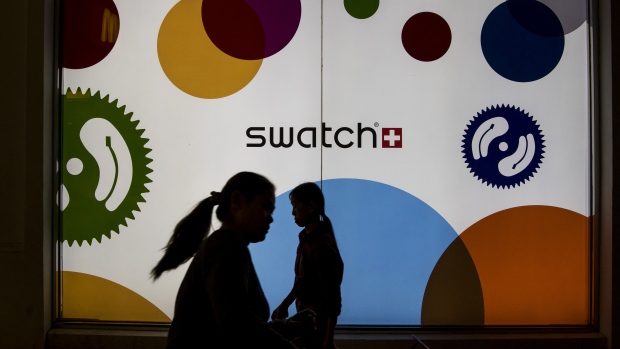 Pedestrians walk past an illuminated advertisement for a Swatch Group AG at night in Macau, China, on Tuesday, Dec. 1, 2015. , Bloomberg

The company that shook up Swiss watchmaking is looking to the fast-food industry for inspiration on how to spruce up retailing.

Swatch Group AG, the maker of US$50 plastic timepieces, is setting up a drive-through store where it will sell products from its namesake label packed in burger boxes and brown paper bags. The shop, next to the company’s headquarters in Biel, Switzerland, is set to open in coming weeks, Chief Executive Officer Nick Hayek said at the company’s annual general meeting on Thursday.

While Swatch plans just one drive-through site in the out-of-the-way city for now, the move shows how the brand is trying to inject novelty into the buying process. After years of insisting that customers prefer the boutique experience before splurging, Swiss watchmakers have been revamping retail networks as consumers increasingly search for and buy products online.

Companies have also been cutting out middlemen, focusing more on their own stores and keeping a bigger part of the profit for themselves. Cartier owner Richemont acquired online luxury retailer YNAP and secondhand site Watchfinder last year.

The move by Swatch, which also owns Omega and Tissot, comes at a time when lower-end timepieces aren’t selling as well as watches with bigger price tags. The Swatch brand may be losing money, or breaking even at best, Bernstein analyst Luca Solca said in an April 30 note.

Hayek said the label has always bucked industry conventions because retailers initially rejected the product, forcing the company to open its own boutiques. Swatch also became one of the first watch brands to sell online.

“Innovating in distribution is important, to look for consumers,” Hayek said. “Nobody else in the world dared to do this.”