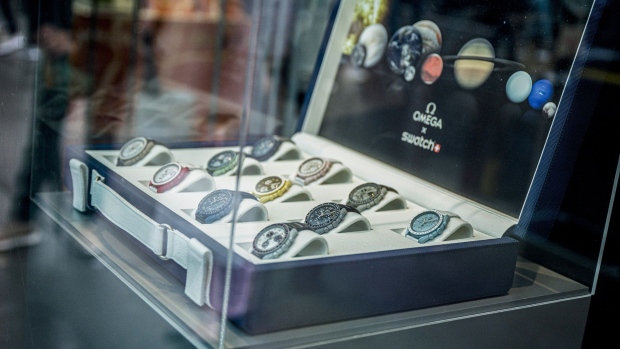 (Bloomberg) -- Swatch Group could hit record sales of as much as 9 billion Swiss francs ($9.8 billion) this year as China rebounds from Covid restrictions and demand remains strong in Europe and the US, Chief Executive Officer Nick Hayek said in an interview.

Hayek’s bullish outlook helped propel Swatch shares as much as 2% higher at the open in Zurich. Analysts have been expecting 8.1 billion francs of revenue this year.

Swatch is one of the luxury-goods makers that will benefit the most from China’s reopening as the watchmaker gets more than 40% of its revenue from that market, according to Citigroup analyst Thomas Chauvet. Hayek said sales in China have already exceeded a very strong January last year and that a continued strong performance from brands including Swatch, Omega and jeweler Harry Winston could help drive 2023 revenue to a record.

“This is realistic and achievable,” the CEO said in the interview.

Turmoil in China led to a shortfall of 700 million francs of revenue in 2022. Sales in China plunged 30% in the fourth quarter and 50% in December as Covid restrictions followed by a wave of infections hit sales of brands like Longines.

Swatch launched the MoonSwatch collaboration in March, causing retail chaos at its boutiques around the world as consumers clamored for a $260 Swatch plastic version of the iconic Omega Speedmaster. The company sold more than a million MoonSwatches in 2022 at Swatch stores.

“It doesn’t stop. The queues are still there,” Hayek said of the MoonSwatch, which is now available in China, India and other markets in Asia.

“We still see potential of double-digit growth in the US,” Hayek also said.