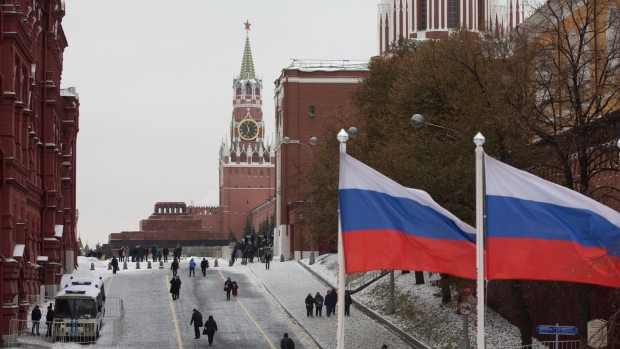 Two Russian Federation flags fly on a road leading to the Lenin mausoleum on Red Square in Moscow, Russia, on Thursday, Nov. 10, 2016. Russia is realistic about limits on the prospects for an immediate improvement in relations with the U.S. after President-elect Donald Trump takes office, according to President Vladimir Putin’s spokesman. Photographer: Andrey Rudakov/Bloomberg , Bloomberg

The man, who wasn’t identified, was detained in February 2019 during a meeting in central Stockholm with a Russian intelligence officer who worked under diplomatic cover in Sweden, the Swedish Security Service said in a website statement on Monday. He is suspected of having been handing information to Russia “for several years.”

State broadcaster SVT identified the defendant as a Swede who had worked as a consultant for Volvo Cars in Gothenburg and Scania CV in Sodertalje.