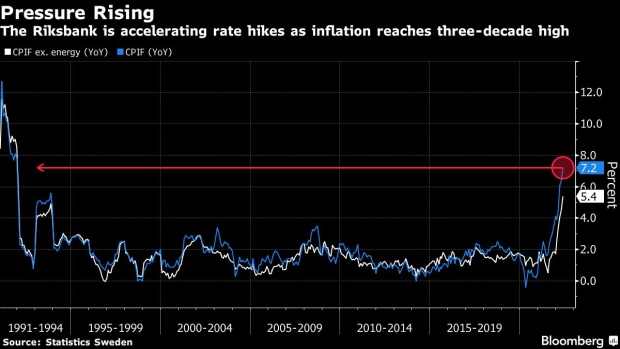 Pedestrians walk down a shopping street in Stockholm, Sweden, on Thursday, Aug. 6, 2020. Sweden was unable to escape its worst economic contraction ever despite adopting one of Europe’s softest approaches to the Covid-19 pandemic. , Bloomberg

(Bloomberg) -- Sweden’s Riksbank doubled its pace of interest-rate hiking and signaled it could accelerate if needed, aligning with the heightened urgency of global counterparts to bring inflation under control.

The central bank raised its policy rate by a half point to 0.75%, conforming to the predictions of most economists. By the start of next year, it will have reached close to 2%, officials said, a forecast that implies at least two more increases of the same size.

“The Riksbank will as always adapt its monetary policy to the developments in the economy and is prepared to raise the policy rate faster if this is needed to ensure that inflation returns to the target,” it said in a statement.

The central bank’s new aggression echoes what may be the most drastic global monetary policy tightening since the 1980s. It follows a series of inflation outcomes exceeding Riksbank forecasts with the fastest rate of price increases in three decades, blindsiding Governor Stefan Ingves and his colleagues.

That has forced the bank to accelerated action even if it threatens to drag the economy into a recession. Officials now expect the Swedish economy to expand by 1.8% this year, down from a 2.8% forecast in April.

“Inflation has risen strongly and is expected to remain above 7 per cent for the remainder of the year,” the central bank said in a statement. “The risk has therefore increased that the high inflation will become entrenched in price setting and wage formation.”

A survey published Wednesday showed that Swedish consumers are gloomier than they have been since the mid-1990s, as prices have surged on everything from fuel to food and furniture. That pain is set to be compounded by the Riksbank’s policy response, as heavily indebted home owners will see their mortgage costs surge.

Rate-setters at the Riksbank previously stressed that while they are focused on bringing inflation under control, they would prefer to raise rates gradually to avoid unnecessary damage to the economy.

In an expression of that sentiment, Deputy Governor Per Jansson said earlier this month that “you shouldn’t bring out the ax,” when a carving knife may do the job.

The specter of rapidly increasing rates has also stoked fears of a hard landing in the country’s housing market, which has seen decades of virtually uninterrupted price growth.

That development is now rapidly reversing, and a closely-watched price index fell by 1.6% in May from the previous month, in the largest drop since the pandemic started in April 2020.

“One risk is that the adaptation process will be abrupt and that housing prices will fall considerably,” the Riksbank said. “This could cause both household consumption and housing investments to be weaker than in the forecast.”