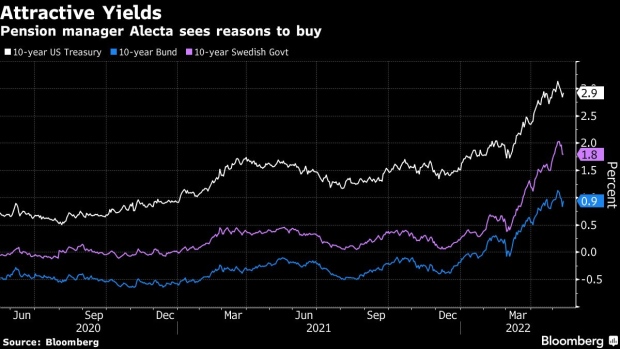 (Bloomberg) -- Sweden’s biggest pension company has begun buying government bonds amid a “paradigm shift” in the market that pushed yields to their highest level since 2018.

“We have done a bit when it comes to long-term interest rates as we think we get well paid,” Hans Sterte, the chief investment officer at Stockholm-based Alecta, said in an interview.

The CIO views Treasuries as “quite attractive” after a prolonged period of razor-thin yields that forced the company into alternative and riskier asset classes to preserve returns across its $117 billion portfolio.

The move by Alecta echoes that of other asset managers who are increasingly moving into the sold-off government bond market, where exposures can act as a hedge against further economic gloom and weakness in global equities.

Fears of an inflation-fueled downturn in stock markets prompted Sterte to cut the company’s allocation to equities by 7 percentage points in 2021, while also boosting the portfolio’s share of real estate and alternative investments to 19%. It’s a trade that paid off given this year’s rout in European stocks where Stockholm’s benchmark index is down more than 16%.

“Diversification has worked as it was intended to,” Sterte said, pointing to 5% returns from an alternatives portfolio that includes infrastructure projects and residential housing.

But for the moment Alecta’s overall portfolio composition remains unchanged and Sterte says this is not the time for bargain hunting in stocks. “If you were to make major allocation changes now, you are just guessing,” the CIO said. “And we don’t do that.”

Sterte however sees the risk of a “washout as substantial” when it comes to equity markets. Under such a capitulation, Alecta “will be ready” to then reallocate more of the portfolio toward equities, he said.