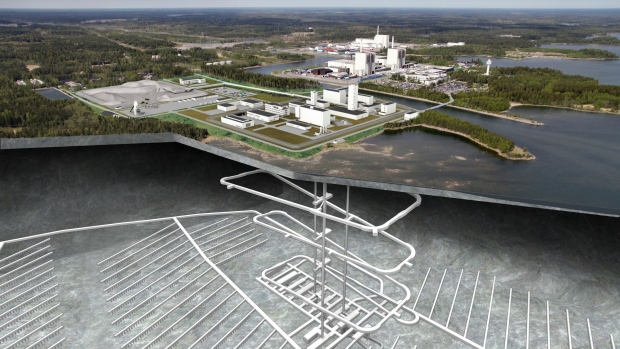 Plans for a repository site at Forsmark in Sweden , SKB AB

(Bloomberg) -- Sweden has less than a week to decide where to store its nuclear waste or risk having the lights go out.

The Scandinavian country is running out of space to store the waste produced by its six reactors, which supply about a third of the nation’s power. Without a decision before the end of the month, nuclear operators including Vattenfall AB say they will have to start halting plants in just three years.

That would trigger a national power crisis and put Sweden’s net-zero target at risk. As the government meets on Thursday, members of the ruling coalition formed by the Social Democrats and the Green Party are likely to address the issue, which has stalled for more than a year.

“There is no realistic way to replace the nuclear output with such a short notice,” said Torbjorn Wahlborg, head of generation at state-owned Vattenfall, which operates five of Sweden’s six reactors. “On the contrary, the remaining reactors are needed more than ever given the huge growth in demand for power Sweden will need to become carbon neutral.”

Sweden’s case highlights a contentious subject for the nuclear industry, with most countries yet to find a permanent solution to store their spent fuel. To make matters worse, Japan shocked the world earlier this year when it announced plans to dump more than 1 million cubic meters of treated radioactive water from the wrecked Fukushima Dai-Ichi nuclear power plant into the Pacific Ocean. That’s enough to fill 500 Olympic-size swimming pools.

European countries have taken different stances on nuclear power, with Germany opting to exit, while France and the U.K. are relying on reactors to reach their emissions goals. Sweden, which counts on renewables for a large part of its power production, will need nuclear as well as emission cuts from its heavy industry and transport to reach its net-zero goal by 2045.

It’s been more than a decade since the Swedish Nuclear Fuel and Waste Management Co. filed an application to build a repository. A method that involved putting spent fuel in copper canisters and burying them 500 meters under the ground in bentonite clay has already been approved by neighboring Finland, while Russia has opted for expensive recycling.

In October, the company responsible for disposing all of Sweden’s nuclear waste said it had already won approvals from all necessary courts, authorities and even from the municipality where it wants to build the site. But the government is yet to approve it.

“This is not about taking a stand for or against nuclear power, this is about there being a reliable solution and needing to move ahead with the process,” said Chief Executive Officer Johan Dasht.

Sweden needs to make a decision to avoid exceeding the permit for the interim storage currently being used by the industry. But with the recycling adopted by Russia yet to be cost-effective and Finland still to convince other nations that their methodology will withstand for at least 100,000 years without rusting or leaking, the Swedish government is in a tight spot.

A decision of this magnitude needs to take all the the time that is necessary, said Environmental Minister Per Bolund. The government is instead proposing to decide on expanding the intermediate storage site and then consider the application to build the repository.

“By splitting up the different decisions the government wants to avoid putting Sweden in a situation that would jeopardize our supply of electricity,” Bolund said in an emailed statement. “There is a significant risk that the coming judicial process will not be completed before the intermediary storage site hits the ceiling of its existing permit.”

For the government -- which counts on the anti-nuclear Green Party as a key part of its ruling coalition -- the issue is extra delicate. Not only does the industry oppose a split of the application, but so does its own two key expert authorities on the issue. Both the Swedish Radiation Safety Authority and the Swedish Energy Agency opposes a split on the grounds that it poses an even greater risk of getting stuck in a lengthy legal process.

“I find it remarkable that this government is not capable of trusting their own expert authorities in their decision-making,” Dasht said.