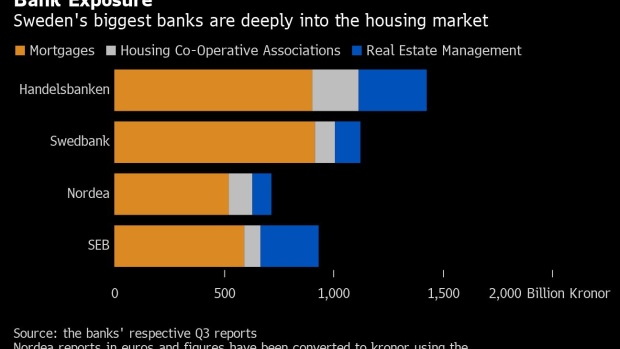 Housing prices in Sweden have been on a downward trajectory for almost a year, with homes shedding close to 15% of their value in one of Europe’s most dramatic routs. Wykman said while the drop is manageable, the funding situation for commercial real-estate firms must be closely monitored.

“The Swedish bank system is robust and we have a strong position to handle even a worsened situation,” Wykman said. “But of course, there has been a drop in housing prices, and there is some reason for concern in the commercial real estate market.”

Sweden’s problems are emblematic of a global trend, as years of ultra-loose monetary policy are reversed, increasing the cost of capital and weighing on property markets. Along with countries including Canada and Australia, Sweden has seen a particularly steep drop, and economists generally expect a 20% decline from a peak seen in the first quarter of 2022.

Wykman’s party has said it wants to pause amortization requirements for borrowers in a bid to help households that are under pressure from rising rates and prices. However, the idea was firmly discouraged by the country’s central bank, whose former governor Stefan Ingves said temporarily lifting the mandatory rules would lead to higher interest rates and be tantamount to “shooting yourself in the foot.”

--With assistance from Katharina Rosskopf.