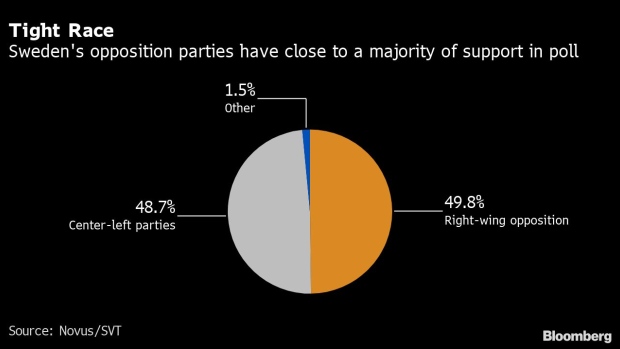 (Bloomberg) -- Sweden’s right-wing opposition may be on the way to unseat Prime Minister Magdalena Andersson’s Social Democratic government, as it holds a narrow lead in a poll published less than four weeks before general elections.

In the poll by Novus, commissioned by public broadcaster SVT, the loose coalition of four opposition parties was supported by 49.8% of voters, 1.2% higher than in the company’s previous poll. The parties that are likely to support an Andersson-led government drew support from 48.7% of respondents.

The Sept. 11 elections come after unusually tumultuous years in the nation’s politics. Even if Andersson, who became Sweden’s first female prime minister last year, is able to overcome the opposition, she will face a daunting challenge in forming a viable coalition. Any government led by her will likely need support from the ex-communist Left Party as well as the pro-market Center Party.

At the root of the turbulence that has rocked Swedish politics is the emergence of the nationalist Sweden Democrats, which upended what was once a stable two-horse race between left-leaning parties led by the Social Democrats and a center-right coalition spearheaded by the Moderates.

The nationalist party, which grew out of Sweden’s far-right and neo-nazi milieus, was long shunned by established parties but has now formed a loose alliance with the Moderates and other parties to the right.

As election campaigns enter the final stretch, the Social Democrats have tried to gain the upper hand by promising large handouts to households that are seeing energy prices soar despite Sweden being Europe’s largest power exporter.

In addition to energy prices, a surge in gang-related gun violence in recent years has put law and order front and center in the political debate. Some polls even indicate that crime, for the first time, is the top priority for Swedish voters. While that focus would traditionally favor right-wing parties, so far they haven’t been able to capitalize by securing a convincing lead in polls.

The Social Democrats, meanwhile, are betting that Andersson’s strong approval ratings can help them secure another four years in power. A Demoskop poll published last week showed 53% of voters have confidence in her, compared with 40% for Moderate leader Ulf Kristersson.