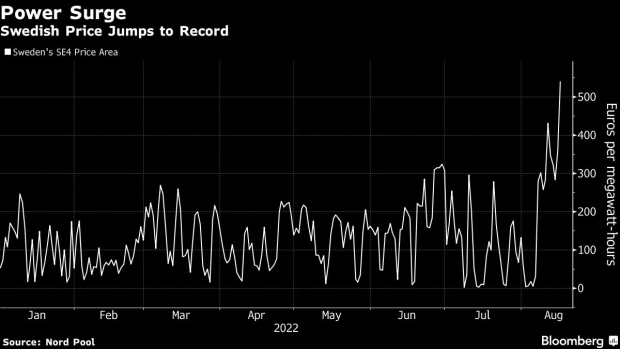 (Bloomberg) -- Sweden is relying on an old oil-fired power plant to keep the lights on in the south as a dearth of wind generation and nuclear outages sends prices to a record.

The Karlshamn station, which burns heavy fuel oil and dates back to the early 1970s, has been running fairly regularly for about a week, according to operator Uniper SE. Power prices in the southern part of a country are at an all-time high for Wednesday, soaring as much as 51% in an auction on Nord Pool ASA.

It’s the latest evidence of how combating global warming has taken a backseat as Europe faces a historic energy crisis. Burning oil is a reliable source of generating power -- but among the most polluting methods -- and adds to the rising use of coal needed to meet demand in the region.

The plant, which has a capacity of 662 megawatts, has been operating at about 200 to 300 megawatts and has been called upon “frequently over the past week from morning to night,” spokesman Torbjorn Larsson said by email.

The plant has been using between 50 and 70 tons of fuel per hour, he said. That would equate to about 9,000 barrels a day over a full 24-hour period, according to Bloomberg calculations. While the volume is small in the context of the global oil market, it underscores a continued trend of consumers burning more oil to generate electricity as natural gas prices soar to records.

Last week the International Energy Agency lifted its forecast for global oil demand by 380,000 barrels a day for the rest of this year, citing switching as one of the reasons behind the increase. The agency said the majority of the fuel consumed would be non-road gasoil and fuel oil.

Southern Sweden is particularly vulnerable to low wind levels after several nuclear reactors were shut over the past few years. Summer maintenance at some of the existing units means that the Karlshamn station is vital to help meet demand.