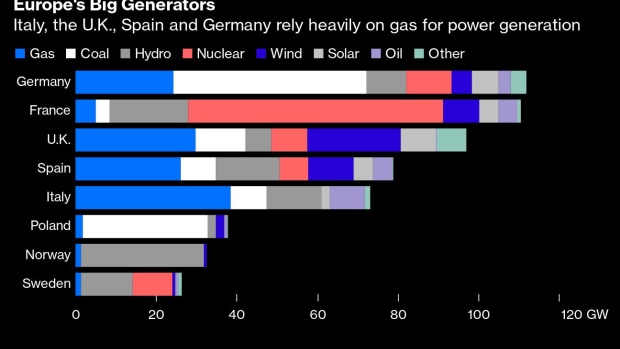 (Bloomberg) -- The Swedish economy is robust enough to withstand the effects of the energy crunch that has gripped Europe and filtered into Scandinavia, Swedish Prime Minister Stefan Lofven said.

“We have a very, very strong economy,” Lofven said in an interview in New York on Sunday. “If we have dramatically higher prices in the long term that will affect consumption, but I don’t think we’re there.”

Sweden’s debt to gross domestic product ratio has held below 40% even during the Covid-19 crisis and remains one of the lowest in Europe. That measure is set to fall to about 35%, Lofven said.

Natural gas prices in Europe have more than tripled this year, sparking fears of surging inflation across the continent and even prompting the U.K. government to hold emergency talks with power suppliers.

While natural gas isn’t widely used in Sweden, it has spurred a jump in other energy costs, which have historically been among the lowest in the region. Consumer prices climbed more than expected in August, and Swedbank AB warned last week that inflation could reach the highest level since the global financial crisis in 2008.

One simple solution, according to Lofven, is to produce more power. The country normally has an annual surplus of about 25 terawatts that it sells to Europe -- hydro power accounts for the biggest proportion of Sweden’s electricity production, followed by nuclear. By 2040, it plans to double electricity output from current levels, he said.

The current crisis reinforces the need for the European Union to work out how best to produce more electricity in the longer term, according to Lofven, who said last month he was stepping down as prime minister.

“We need to watch out,” he said. “The whole European Union needs to think this through.”