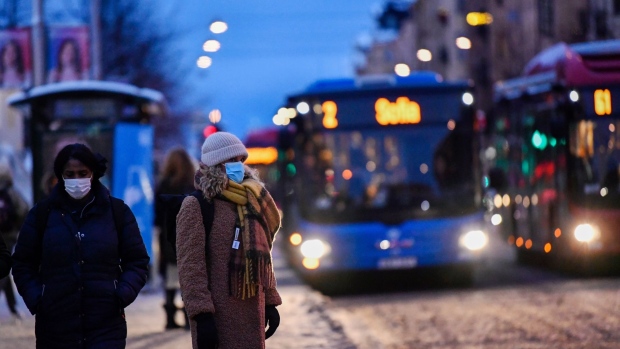 (Bloomberg) -- Authorities in Stockholm and a number of other regions across Sweden are abandoning their earlier skepticism and advising people to rely more on face masks, as the country braces for a third wave of coronavirus infections.

The development marks a reversal of Sweden’s earlier doubts regarding face coverings, and coincides with an increase in transmission rates. On Tuesday, Stockholm authorities recommended the use of masks on public transport, not just in rush hour but at all times. They also want coverings to be used in shops and in offices.

The number of new coronavirus cases rose 27% last week in the Swedish capital, which not that long ago saw its intensive-care resources pushed to the brink. The relentlessness of the virus has driven Sweden’s government to reconsider its hands-off approach, and parliament enacted legislation last month to allow tougher pandemic restrictions.

Sweden’s stance on face masks has long been controversial, with state epidemiologist Anders Tegnell repeatedly questioning their efficacy. But after almost a year of intense debate, such coverings are set to become more widespread in Scandinavia’s most populous nation.

“We need to increase face-mask wearing a lot,” infection control officer Maria Rotzen Ostlund said. “However, disposable face masks are only a complement, and the most important thing is to keep a distance.”

Sweden’s Public Health Agency has long questioned the science behind face masks as an effective tool during a pandemic, and warned that such coverings risk creating a false sense of security that might lead people to grow complacent on social-distancing guidelines. But that view has come under fire from critics, including Sweden’s Royal Academy of Sciences, which published a report to support the use of face masks as a meaningful way to stop transmission.