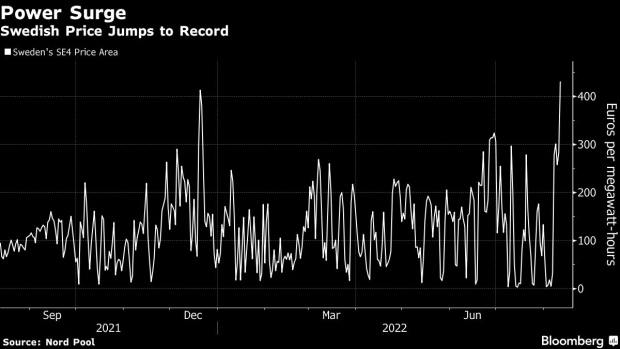 (Bloomberg) -- Sweden, Europe’s top power exporter, is helping boost regional supply at a time it is needed the most even as its own citizens are “taking a tough beating,” the country’s energy minister said.

“Although we are for now the top exporter in Europe -- we have electricity in abundance -- we are being hit by the high prices that we see down on the continent,” Khashayar Farmanbar said in an interview on Friday. “We are considering all measures to either lower the prices or help the households and industry in order to manage the situation.”

The largest Nordic nation became the region’s top exporter in the first half after France suffered problems at its aging reactors, turning it into a net importer. But despite the surplus in Sweden, electricity costs are soaring as the region faces its worst energy crisis in decades.

Power prices for Friday surged to their highest ever in the south of the country and some utilities advised customers to curb consumption if possible. Farmanbar said that the quickest way for households to deal with the situation is to get more energy efficient, instal energy saving appliances for example and use the subsidies available.

While Sweden generates electricity mainly from hydro power, nuclear and wind, which are all relatively cheap sources, the fact that European markets are connected means that there is no escaping the surging costs caused by dwindling Russian gas supplies.

Farmanbar also essentially ruled out any kind of energy rationing. Electricity shortages are still occurring in the models authorities are using to plan for when demand is peaking.

“Energy rationing is not on the table for right now, we don’t see that happening at all but energy shortages we see in 6% of simulations,” he said.